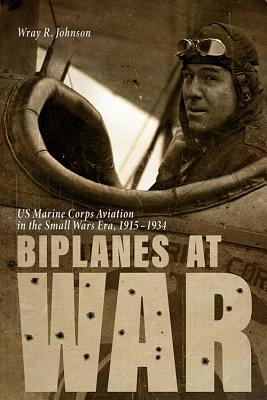 Unlike the relative uniformity of conventional warfare, the peculiarities of small wars prevent a clear definition of rules and roles for military forces to follow. During the small wars era, aviation was still in its infancy, and the US military had only recently begun battling in the skies. The US Marine Corps recognized that flexibility and ingenuity would be critical to the successful conduct of small wars and thus employed the new technology of aviation.

In Biplanes at War: US Marine Corps Aviation in the Small Wars Era, 1915--1934, author Wray R. Johnson provides a riveting history of the marines' use of aviation between the world wars, a time in which young soldiers were volunteering to fly in combat when flying itself was a dangerous feat. Starting with Haiti in 1915, Biplanes at War follows the marines' aviation experiences in Haiti, the Dominican Republic, China, and Nicaragua, chronicling how marines used aircraft to provide supporting fires (e.g., dive-bombing) to ground troops in close contact with irregular opponents, evacuate the sick and wounded, transport people and cargo (e.g., to assist humanitarian operations), and even support elections in furtherance of democracy.

After years of expanding the capabilities of airplanes far beyond what was deemed possible, the small wars era ended, and the US Marines Corps transitioned into an amphibious assault force. The legacy of the marines' ability to adapt and innovate during the small wars era endures and provides a useful case study. Biplanes at War sheds light on how the marines pioneered roles and missions that have become commonplace for air forces today, an accomplishment that has largely gone unrecognized in mainstream histories of aviation and air power.

Wray R. Johnson is professor of military history at the School of Advanced Warfighting, Marine Corps University. He is a retired US Air Force colonel with a background in special operations and is the author of Airpower in Small Wars: Fighting Insurgents and Terrorists and Vietnam and American Doctrine for Small Wars.