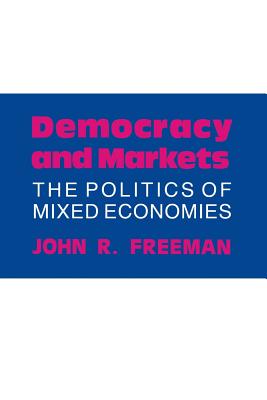 By John R. Freeman
Email or call for price

Events of the 1970s and 1980s have provoked intense controversy about the desirability of existing political and economic institutions. On the basis of an analysis of social welfare in varying types of market systems and in certain democratic political systems, Democracy and Markets illuminates alternative directions for institutional reform. Examining in detail the experiences of several democratic European countries, John R. Freeman considers whether a mixed ownership structure is preferable to a private ownership structure; and whether a pluralist type of democratic politics is preferable to a corporatist type.

Freeman compares the benefits of the two economic and two political systems separately, and then analyzes the workings of four basic political economies. This analysis yields a welfare taxonomy for alternative forms of democratic capitalism and more specifically a characterization of the blends of collective gain and distributional equity that can be achieved in the four systems. Freeman demonstrates the validity of this taxonomy through an empirical investigation of the political economies of Britain, Austria, Sweden, and Italy. Under current conditions, he concludes, the corporatist-mixed system produces the most desirable blend of welfare outcomes.

John R. Freeman is Professor of Political Science at the University of Minnesota.