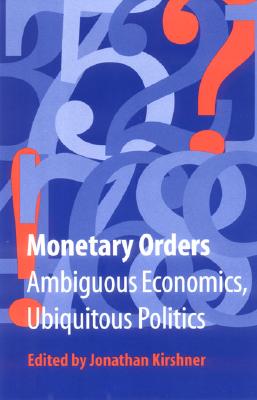 By Jonathan Kirshner (Editor)
Email or call for price

Wherever there is money, there is money politics-a subject demanding ever greater attention at a time when monetary policies lead and the real economy follows. A principal defining characteristic of the contemporary global economy, Jonathan Kirshner contends, is the rise and preeminence of monetary phenomena--international financial crises, Central Bank Independence and inflation fighting, the creation of the euro, and monetary reform in emerging economies, to name only a few. Moreover, unlike most debates in political economy (such as those regarding trade policy), which are generally recognized as political, monetary phenomena and macroeconomic policies are typically represented as expressly apolitical. In Monetary Orders, a distinguished group of scholars explores the inescapable political origins of choices about money. The essays in Monetary Orders each address a specific issue or puzzle relating to money and its management. Their authors focus on markedly disparate cases but share a common observation: for most policy choices about money, market forces and economic logic can rule out certain options, but are indeterminate in explaining why one policy rather than another will be chosen. Ultimately, political factors are essential to explain fundamental and consequential choices about money.

Jonathan Kirshner is Associate Professor of Government at Cornell University and the author of Currency and Coercion: The Political Economy of International Monetary Power.