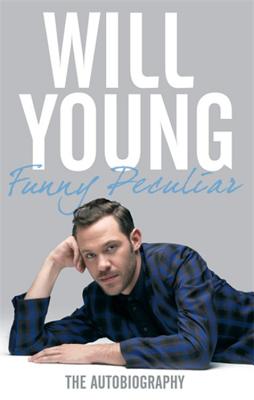 By Will Young
Email or call for price

In 2001 Will Young shot to fame as the first winner of "Pop Idol." It was clear from the start that he would never be a typical pop star and more than10 years later he has become one of our best-loved and most intriguing artists. From his dramatic experiences on "Pop Idol"; to coming out in the glare of the media spotlight; to his valiant struggles against depression; to the crazy reality of being famous, Will is open about both the highs and lows of his life. He also provides sound and practical advice on dealing with the DVLA helpline something that has been woefully neglected by all other celebrity memoirs. If you have ever wondered what it's like to attend a fashion show (and find yourself accidentally waving at Anna Wintour); how it feels to sing in front of thousands while fighting a catastrophic bout of low self-esteem; or be subjected to the terror that is a "This Morning" "makeover," then "Funny Peculiar" reveals all. It also reveals what not to say if you ever meet David Beckham. Moving, witty and scrupulously honest, "Funny Peculiar" is a refreshingly different and fascinating autobiography by a true original. With free audio sampler.

Will Young was born in 1979. He has sold nine million records and has been nominated for and won numerous awards including two Brit Awards and an Ivor Novello. Will was the subject of a" South Bank Show Special" and has also appeared on "Question Time" twice. He is an established actor, having starred in "Mrs Henderson Presents" with Dame Judi Dench; he also appeared in Noel Coward's "The Vortex "at the Royal Exchange Theatre and was cast in a lead role in hit TV series "Bedlam." More recently he was a co-producer for Ralph Fiennes' "Coriolanus." He lives in London.