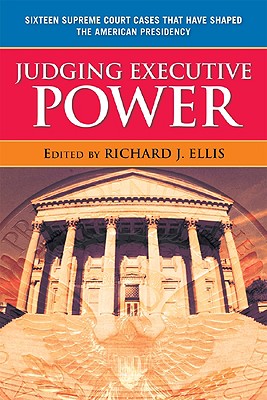 By Richard J. Ellis
Email or call for price

George W. Bush's presidency has helped accelerate a renewed interest in the legal or formal bases of presidential power. It is now abundantly clear that presidential power is more than the sum of bargaining, character, and rhetoric. Presidential power also inheres in the Constitution or at least assertions of constitutional powers. Judging Executive Power helps to bring the Constitution and the courts back into the study of the American presidency by introducing students to sixteen important Supreme Court cases that have shaped the power of the American presidency. The cases selected include the removal power, executive privilege, executive immunity, and the line-item veto, with particularly emphasis on a president's wartime powers from the Civil War to the War on Terror. Through introductions and postscripts that accompany each case, landmark judicial opinions are placed in their political and historical contexts, enabling students to understand the political forces that frame and the political consequences that follow from legal arguments and judgments.

Richard J. Ellis is the Mark O. Hatfield Professor of Politics at Willamette University, and the author of numerous books on the presidency including, Presidential Travel: The Journey from George Washington to George W. Bush and Founding the American Presidency.