Watchdogs on the Hill: The Decline of Congressional Oversight of U.S. Foreign Relations (Paperback) 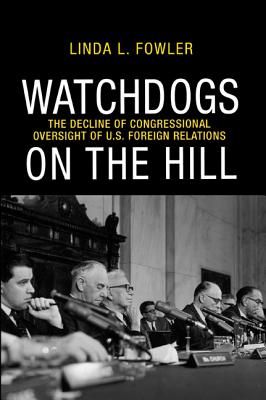 An essential responsibility of the U.S. Congress is holding the president accountable for the conduct of foreign policy. In this in-depth look at formal oversight hearings by the Senate Armed Services and Foreign Relations committees, Linda Fowler evaluates how the legislature's most visible and important watchdogs performed from the mid-twentieth century to the present. She finds a noticeable reduction in public and secret hearings since the mid-1990s and establishes that American foreign policy frequently violated basic conditions for democratic accountability. Committee scrutiny of the wars in Iraq and Afghanistan, she notes, fell below levels of oversight in prior major conflicts.

Fowler attributes the drop in watchdog activity to growing disinterest among senators in committee work, biases among members who join the Armed Services and Foreign Relations committees, and motives that shield presidents, particularly Republicans, from public inquiry. Her detailed case studies of the Truman Doctrine, Vietnam War, Panama Canal Treaty, humanitarian mission in Somalia, and Iraq War illustrate the importance of oversight in generating the information citizens need to judge the president's national security policies. She argues for a reassessment of congressional war powers and proposes reforms to encourage Senate watchdogs to improve public deliberation about decisions of war and peace. Watchdogs on the Hill investigates America's national security oversight and its critical place in the review of congressional and presidential powers in foreign policy.

Linda L. Fowler is professor of government and the Frank J. Reagan Chair in Policy Studies, Emerita, at Dartmouth College. She is the author of Candidates, Congress, and the American Democracy and coauthor of Political Ambition.