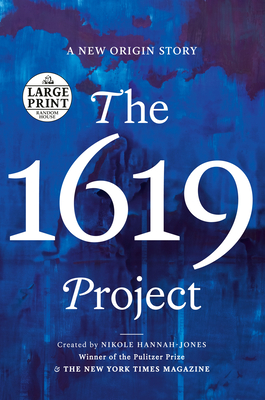 #1 NEW YORK TIMES BESTSELLER • NAACP IMAGE AWARD WINNER • A dramatic expansion of a groundbreaking work of journalism, The 1619 Project: A New Origin Story offers a profoundly revealing vision of the American past and present.

In late August 1619, a ship arrived in the British colony of Virginia bearing a cargo of twenty to thirty enslaved people from Africa. Their arrival led to the barbaric and unprecedented system of American chattel slavery that would last for the next 250 years. This is sometimes referred to as the country’s original sin, but it is more than that: It is the source of so much that still defines the United States.

The New York Times Magazine’s award-winning “1619 Project” issue reframed our understanding of American history by placing slavery and its continuing legacy at the center of our national narrative. This new book substantially expands on that work, weaving together eighteen essays that explore the legacy of slavery in present-day America with thirty-six poems and works of fiction that illuminate key moments of oppression, struggle, and resistance. The essays show how the inheritance of 1619 reaches into every part of contemporary American society, from politics, music, diet, traffic, and citizenship to capitalism, religion, and our democracy itself.

This is a book that speaks directly to our current moment, contextualizing the systems of race and caste within which we operate today. It reveals long-glossed-over truths around our nation’s founding and construction—and the way that the legacy of slavery did not end with emancipation, but continues to shape contemporary American life.

Nikole Hannah-Jones is a Pulitzer Prize–winning reporter covering racial injustice for The New York Times Magazine, and creator of the landmark 1619 Project. In 2017, she received a MacArthur Foundation Fellowship, known as the Genius Grant, for her work on educational inequality. She has also won a Peabody Award, two George Polk Awards, three National Magazine Awards, and the 2018 John Chancellor Award for Excellence in Journalism from Columbia University. In 2016, Hannah-Jones co-founded the Ida B. Wells Society for Investigative Reporting, a training and mentorship organization geared toward increasing the number of investigative reporters of color. Hannah-Jones is the Knight Chair in Race and Journalism at Howard University, where she has founded the Center for Journalism and Democracy. In 2021, she was named one of Time’s 100 most influential people in the world.

The 1619 Project is an ongoing initiative from The New York Times Magazine that began in August 2019, the four hundredth anniversary of the beginning of American slavery. It is led by Pulitzer Prize–winning journalist Nikole Hannah-Jones, along with New York Times Magazine editor-in-chief Jake Silverstein and editors Ilena Silverman and Caitlin Roper.

“Pleasingly symmetrical . . . [a] mosaic of a book, which achieves the impossible on so many levels—moving from argument to fiction to argument, from theme to theme, and backward and forward in time, so smoothly.”—Slate

“A wide-ranging, landmark summary of the Black experience in America: searing, rich in unfamiliar detail, exploring every aspect of slavery and its continuing legacy . . . Again and again, The 1619 Project brings the past to life in fresh ways. . . . Multifaceted and often brilliant.”—The New York Times Book Review

“The groundbreaking project from The New York Times, which created a new origin story for America based on the very beginnings of American slavery, is expanded into a very large, very powerful full-length book.”—Entertainment Weekly

“The ambitious project that got Americans rethinking our racial history—and sparked inevitable backlash—even before the reckoning that followed George Floyd’s murder, is expanded into a book incorporating essays from pretty much everyone you want to hear from about the country’s great topic and great shame.”—Los Angeles Times

“[A] groundbreaking compendium . . . These bracing and urgent works, by multidisciplinary visionaries ranging from Barry Jenkins to Jesmyn Ward, build on the existing scholarship of The 1619 Project, exploring how the nation’s original sin continues to shape everything from our music to our food to our democracy. This collection is an extraordinary update to an ongoing project of vital truth-telling.”—Esquire

“By teaching how the country’s history has been one of depriving the rights of one group for the gain of another, and how those marginalized worked to claim those rights for all, The 1619 Project restores people erased from the national narrative, offering a motivating, if sobering, origin story we need to understand if we are ever going to truly achieve ‘liberty and justice for all.’”—Women’s Review of Books

“Those readers open to fresh and startling interpretations of history will find this book a comprehensive education.”—Kirkus Reviews (starred review)

“Powerful . . . This invaluable book sets itself apart by reframing readers’ understanding of U.S. history, past and present.”—Library Journal (starred review)

“For any lover of American history or letters, The 1619 Project is a visionary work that casts a sweeping, introspective gaze over what many have aptly termed the country’s original sin.”—BookPage (starred review)

“Readers will discover something new and redefining on every page.”—Booklist (starred review)