After the Fall: Being American in the World We've Made (Large Print / Paperback) 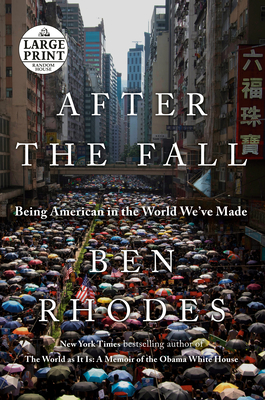 NEW YORK TIMES BESTSELLER • “Vital reading for Americans and people anywhere who seek to understand what is happening ‘after the fall’ of the global system created by the United States” (New York Journal of Books), from the former White House aide, close confidant to President Barack Obama, and author of The World as It Is

At a time when democracy in the United States is endangered as never before, Ben Rhodes spent years traveling the world to understand why. He visited dozens of countries, meeting with politicians and activists confronting the same nationalism and authoritarianism that are tearing America apart. Along the way, he discusses the growing authoritarianism of Vladimir Putin, and his aggression towards Ukraine, with the foremost opposition leader in Russia, who was subsequently poisoned and imprisoned; he profiled Hong Kong protesters who saw their movement snuffed out by China under Xi Jinping; and America itself reached the precipice of losing democracy before giving itself a fragile second chance.

The characters and issues that Rhodes illuminates paint a picture that shows us where we are today—from Barack Obama to a rising generation of international leaders; from the authoritarian playbook endangering democracy to the flood of disinformation enabling authoritarianism. Ultimately, Rhodes writes personally and powerfully about finding hope in the belief that looking squarely at where America has gone wrong can make clear how essential it is to fight for what America is supposed to be, for our own country and the entire world.

Ben Rhodes is the author of the New York Times bestseller The World as It Is, co-host of Pod Save the World, a contributor for NBC News and MSNBC, and an adviser to former president Barack Obama.

Praise for The World as It Is

“A classic coming-of-age story, about the journey from idealism to realism, told with candor and immediacy . . . [Ben Rhodes’s] achievement is rare for a political memoir: He has written a humane and honorable book.”—The New York Times Book Review

“More than any other White House memoirist, Rhodes is a creature of the man he served.”—The New Yorker

“Insightful, funny, and moving, this is a beautifully observed, essential record of what it was like to be there.”—Samantha Power