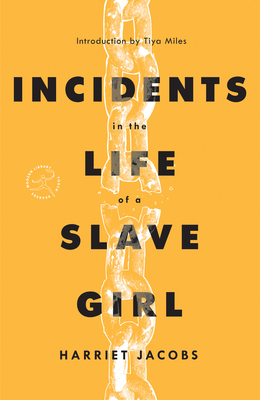 The unflinching nineteenth-century autobiography that broke the silence on the psychosexual exploitation of Black women—with an introduction by Tiya Miles, author of All That She Carried and National Book Award finalist

“[A] crowning achievement . . . [Jacobs] remodeled the forms of the black slave narrative and the white female sentimental novel to create a new literary form—a narrative at once black and female.” —Henry Louis Gates, Jr., The New York Times

In clear and unshrinking prose, Harriet Jacobs—writing under the pseudonym Linda Brent—relates the story of her girlhood and adolescence as a slave in North Carolina and her eventual escape: a bildungsroman set in the complex terrain of a chauvinist, white supremacist society. Resolutely addressing women readers, rather than men, Incidents in the Life of a Slave Girl seeks to make white women understand how the threat of sexual violence shapes the lives of enslaved Black women and children. Equal parts brave and searing, Incidents in the Life of a Slave Girl is a triumph of American literature.

The Modern Library Torchbearers series features women who wrote on their own terms, with boldness, creativity, and a spirit of resistance.
AMERICAN INDIAN STORIES • THE AWAKENING • THE CUSTOM OF THE COUNTRY • THE HEADS OF CERBERUS • LADY AUDLEY’S SECRET • LOVE, ANGER, MADNESS • PASSING • THE RETURN OF THE SOLDIER • THERE IS CONFUSION • THE TRANSFORMATION OF PHILIP JETTAN • VILLETTE

Harriet Jacobs (1813–1897) was born into slavery in North Carolina. She became a mother at sixteen, a fugitive slave at twenty-two, and, in January 1861 at the age of forty-eight, the author of Incidents in the Life of a Slave Girl. During the Civil War, Jacobs and her daughter, Louisa, returned to the South to aid African American refugees. Following the Civil War, they built an orphanage and home for African American children and elders in Savannah, Georgia.