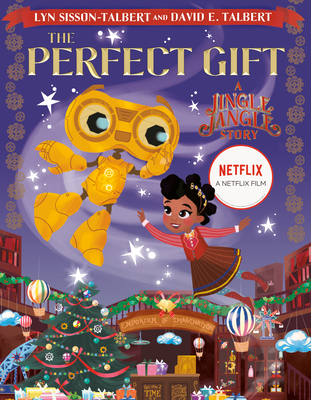 Journey is prepared to have a magical Christmas with Buddy. But while she is introducing him to the small wonders of the world, she panics and realizes she forgot to get him a gift. Journey scours the town looking for the perfect thing until she learns she may have had it all along . . .

In this sequel to The Square Root of Possible, we follow Journey as she shows Buddy the true meaning of Christmas, doing it with her family by her side. A delightfully illustrated holiday picture book story brought to you by Lyn Sisson-Talbert and David E. Talbert, inspired by the Netflix original holiday film starring Forest Whitaker, Phylicia Rashad, Anika Noni Rose, Keegan-Michael Key, Ricky Martin, and introducing Madalen Mills.

Lyn Sisson-Talbert stands tall as one of the most accomplished female producers in Holly-wood and the guiding force behind top grossing original projects for film, stage, and literature. Sisson-Talbert produced Netflix’s first original live-action musical, Jingle Jangle: A Christmas Journey, and authored the Jingle Jangle book series, including The Square Root of Possible and Jingle Jangle: The Invention of Jeronicus Jangle. Following the film’s release, Sisson-Talbert inked a first-look film deal with Netflix, launching Golden Alchemy Entertainment alongside her husband. Sisson-Talbert’s other film producing credits include Fox Searchlight’s Baggage Claim and Universal’s Almost Christmas, both of which opened as the #1 Comedy in America. You can follow Lyn onTwitter @LynTalbert and Instagram @lynsissontalbert