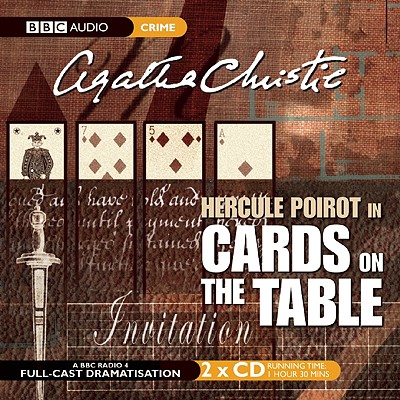 Hercule Poirot, along with three other luminaries from the world of crime detection, is invited to dinner by the renowned London socialite Dr Shaitana. Also on the guest list are four members of what Shaitana calls his Black Museum - a collection of murderers who have each succeeded in 'getting away with it'. An elegant dinner is followed by a game of bridge, in which Shaitana himself does not participated. But just after midnight, when the guests prepare to leave, they make a terrible discovery. Their host is dead in his armchair, stabbed in the chest. The four sleuths are thus faced with one murder and a quartet of likely suspects. Working both together and independently, they investigate the pasts of the Black Museum's finest in order to determine the most likely killer. Poirot finds that many hindrances and distractions are thrown in his way, as he attempts to read the meaning of the cards which each suspect has placed on the table. Agatha Christie's intriguing mystery is dramatised with a full cast including Stephanie Cole and Donald Sinden.

Agatha Christie, the acknowledged Queen of Detective Fiction (The Observer) was born in Torquay in 1890. During the First World War she worked as a hospital dispenser, and it was here that she gleaned the working knowledge of various poisons that was to prove so useful in her detective stories. Her first novel was The Mysterious Affair at Styles, which introduced Hercule Poirot to the world. This was published in 1920 (although in fact she had written it during the war) and was followed over the next six years by four more detective novels and a short story collection. However, it was not until the publication of The Murder of Roger Ackroyd that Agatha Christie s reputation was firmly established. This novel, with its complex plot and genuinely shocking conclusion, attracted considerable public attention and has since been acknowledged by many experts as a masterpiece. In 1930 the sharp-witted spinster sleuth Miss Marple made her first appearance in Murder at the Vicarage. In all, Agatha Christie published 80 crime novels and short story collections. The brilliance of Christie s plots, and her enduring appeal, have led to a number of dramatisations of her work on radio, television and film. In 1930 she was one of a number of crime writers asked to contribute a chapter to a mystery, Behind the Screen, that was broadcast on BBC radio on 21st June that year. More recently, June Whitfield portrayed Miss Marple on BBC Radio 4, whilst John Moffat starred as Hercule Poirot. On screen, Peter Ustinov, David Suchet, Margaret Rutherford, Joan Hickson, Geraldine McEwan and Julia McKenzie have all memorably played Agatha Christie s famous sleuths. As her play The Mousetrap (the longest-running play in the history of the theatre) testifies, Agatha Christie s detective stories are likely to appeal for a long time to come. Agatha Christie was awarded a CBE in 1956 and was made a Dame of the British Empire in 1971. She died in 1976."