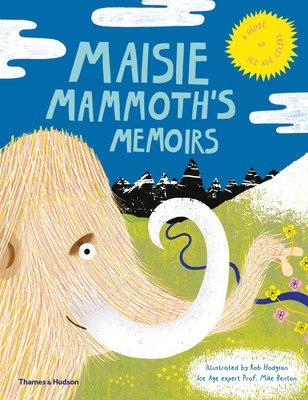 This enchanting, humorous history of Ice Age beasts is told by the “it” girl of the period, Maisie the woolly mammoth.

Ice Age “it girl” Maisie Mammoth introduces us to all her glamorous friends in this humorous history of prehistoric beasts. Maisie’s Ice Age who’s who reveals the defining characteristics of some of the most memorable creatures from prehistoric times.

Maisie’s memoir includes tales about Stella the saber-toothed cat, whose megawatt smile contained ten-inch canines; the fiend we all love to hate, Victor the Villain, a forty-three-foot mega-snake who could swallow a crocodile whole; and the slightly more camera-shy Gavin the giant ape, who is rumored to have inspired the myth of the Yeti! It is the second book in a series, which started with Tony T-Rex’s Family Album, that brings animals from the past alive for young children.

Featuring the quirky illustrations of Rob Hodgson, Maisie Mammoth’s Memoirs stands apart with its unforgettable characters and witty approach to paleontology based on the latest scientific research—look out for tips on how to defrost a woolly mammoth!

Michael J. Benton is a professor of vertebrate paleontology and head of the world-leading Palaeobiology Research Group at the University of Bristol. He has written more than fifty books, including Dinosaurs Rediscovered and When Life Nearly Died.