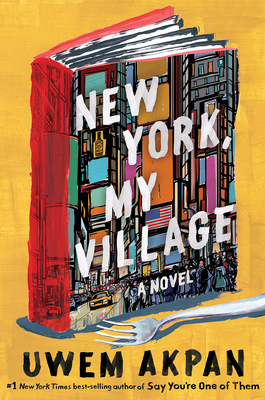 Exuberant storytelling full of wry comedy, dark history, and devastating satire—by the celebrated and original author of the #1 New York Times bestseller, Say You’re One of Them.

From a suspiciously cheap Hell’s Kitchen walk-up, Nigerian editor and winner of a Toni Morrison Publishing Fellowship Ekong Udousoro is about to begin the opportunity of a lifetime: to learn the ins and outs of the publishing industry from its incandescent epicenter. While his sophisticated colleagues meet him with kindness and hospitality, he is soon exposed to a colder, ruthlessly commercial underbelly—callous agents, greedy landlords, boorish and hostile neighbors, and, beneath a superficial cosmopolitanism, a bedrock of white cultural superiority and racist assumptions about Africa, its peoples, and worst of all, its food.

Reckoning, at the same time, with the recent history of the devastating and brutal Biafran War, in which Ekong’s people were a minority of a minority caught up in the mutual slaughter of majority tribes, Ekong’s life in New York becomes a saga of unanticipated strife. The great apartment deal wrangled by his editor turns out to be an illegal sublet crawling with bedbugs. The lights of Times Square slide off the hardened veneer of New Yorkers plowing past the tourists. A collective antagonism toward the “other” consumes Ekong’s daily life. Yet in overcoming misunderstandings with his neighbors, Chinese and Latino and African American, and in bonding with his true allies at work and advocating for healing back home, Ekong proves that there is still hope in sharing our stories.

Akpan’s prose melds humor, tenderness, and pain to explore the myriad ways that tribalisms define life everywhere, from the villages of Nigeria to the villages within New York City. New York, My Village is a triumph of storytelling and a testament to the life-sustaining power of community across borders and across boroughs.

Uwem Akpan’s prose has won the Commonwealth Prize, the Open Book Prize, and the Hurston/Wright Legacy Award, and his first collection was an Oprah Book Club selection. He is from Ikot Akpan Eda in the Niger Delta in Nigeria and lives in Gainesville, Florida.

A searing sendup of publishing, racial biases, and humanity's near-infinite capability to look away from the most troubling parts of ourselves, New York, My Village is that rare thing: a funhouse mirror that reflects back the truth. Uwem Akpan's debut novel maps the constantly shifting ground of grappling with prejudice and guilt—and how we might find connections, and compassion, nevertheless.

I am in awe. I'm still trying to figure out how Uwem Akpan did it. He has transformed the isolating and exhausting intricacies of war trauma into a compulsively readable novel, at once hilarious, utterly harrowing, profoundly optimistic, and horrifically informative. Unforgettable characters, deeply realistic and “relatable” interpersonal conflicts, a contagious love of life, fresh insights into the crazy-making properties of racist ideology: New York, My Village has it all. And it's the great bedbug novel of New York City we have all been waiting for, some of us without knowing it! I adored this book.

— Elif Batuman, Pulitzer Prize finalist and author of The Idiot

A superb story from a superb writer. The most compelling part of this debut novel of a Nigerian writer's immersion in American culture and the publishing world is the narrator's voice, utterly alive, frighteningly observant, deeply compassionate. Once that captivating voice grabs you, from the very first page, you never want to stop listening.
— Father James Martin, SJ, bestselling author of Jesus: A Pilgrimage and Learning to Pray

New York, My Village gives us an intricate braid of the terrors and legacy of war, the inimitable voice of a writer collecting stories of violence and tribalism while negotiating a different tribalism in New York, and the way one man wields the force of love and generosity.

— Susan Straight, author of In the Country of Women

[A] layered novel.... well worth listening to.
— Publishers Weekly

In this much-anticipated debut novel, Nigerian editor Ekong Udousoro is assembling a collection of stories about the Biafran War that brutally rocked his country when he wins a publishing fellowship to continue his work in New York. He learns plenty, good and bad, about publishing (often heartlessly commercial) and about America’s inherent racism. From the author of the Commonwealth Prize and PEN Open Book Award winner Say You're One of Them, an Oprah Winfrey Book Club pick.

A propulsive and sophisticated contemporary take on the New York City publishing industry follows the immigrant winner of a prestigious fellowship into what he thinks will be the role of a lifetime. What unfolds is anything but, plus a bedbug infestation. This ambitious novel deals profoundly with the fundamental questions about diversity, tribalism and reckoning with history.
— Juliana Rose Pignataro - Newsweek

A dizzying and fearless tour of New York's street culture, coffee, food, apartment life and publishing world, interleaved with memorials of war crimes and tense depictions of the human cost of trauma. Uwem Akpan has mastered the art of laugh-out-loud satire, but he leaves room for tears.
— Louise Erdrich, Pulitzer Prize-winning author of The Night Watchman

Akpan, author of the award-winning story collection Say You’re One of Them, allows Ekong’s astonished anger, acerbic humor and, despite every- thing, love of New York and its people to anchor him. Of all the characters in New York, My Village, Ekong knows who he is. We are privileged to get to know him, too.

The tragicomic portrayal of New York publishing and the Biafran war in Uwem Akpan’s New York, My Village made me laugh and cry.

It's been 13 years since Akpan's debut book, the beautiful short story collection Say You're One of Them, and he's only gotten sharper and more self-assured since then. New York, My Village is a wonderful novel, keenly observed and written with true compassion.

Uwem Akpan’s brand of humor and satire draws readers in from the very beginning of his debut novel, New York, My Village. The book is full of colorful and observant portraits of New York City’s neighborhoods, as well as mouthwatering descriptions of food. Anyone who has been involved in the publishing world will find the scenes of pitch meetings and awards dinners especially telling, but they’re not the only ones who will appreciate Akpan’s astute and self-aware novel.
— Norah Piehl - Bookreporter