The Truth: A Novel of Discworld (Hardcover) 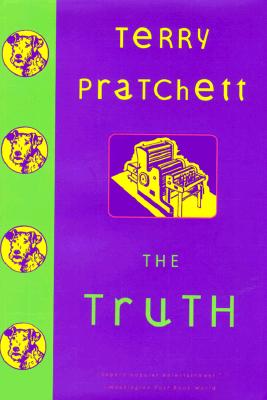 By Terry Pratchett
$24.00
Email or call for price.

Terry Pratchett's acclaimed Discworld novels have been number one bestsellers in England for more than a decade. In fact, this prolific author sold more hardcover books in the United Kingdom during the 1900's than any other living novelist. Critically recognized as one of the most celebrated practitioners of satire and parody -- in the company of Kurt Vonnegut, Douglas Adams, and Carl Hiaasen -- Pratchett, with his unique brand of irreverent humor, is at last being embraced across America.

In this, his twenty-fifth Discworld novel, Pratchett turns his pen on, well, the pen. Or, rather, the press, and its power to disseminate and create the truth. The lesser son of one of Ankh most privileged families, William de Worde a struggling scribe, hits on the brilliant idea of producing his upper-crust newsletter with a newfangled printing press.

Truer to the family motto, Le Mot juste, than his disapproving father can ever realize, de Worde soon finds that his Ankh-Morpork Times is a success. So big, in fact, that certain nefarious factions would like nothing better than to put him out of business. They begin their own rival Ankh-Morpork Inquirer--full of salacious bits -- to do just that. Soon, though, de Worde has more than just the competition to fret over. Lord Vetinari, the Patrician of Ankh-Morpork, is accused of a serious crime in a seemingly airtight case. But William de Worde knows that facts aren't always the truth. Along with a much too prim and proper assistant, a roving photographer vampire with a nasty reaction to his flashgun, and a talking dog who holds the key to the mystery, William de Worde will stop at nothing to get the truth.

And that's the truth.

A dead-on look at the revered fifth estate, the nature of news, and bareknuckled political intrigue, The Truth shall make you free. From everything else you'd be doing instead of enjoying it, that is.