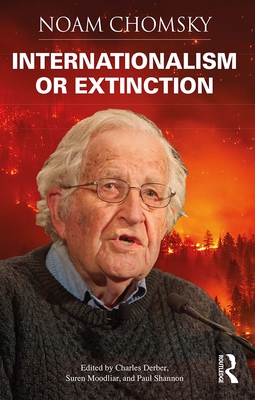 In his new book, Noam Chomsky writes cogently about the threats to planetary survival that are of growing alarm today. The prospect of human extinction emerged after World War II, the dawn of a new era scientists now term the Anthropocene. Chomsky uniquely traces the duality of existential threats from nuclear weapons and from climate change--including how the concerns emerged and evolved, and how the threats can interact with one another. The introduction and accompanying interviews place these dual threats in a framework of unprecedented corporate global power which has overtaken nation states' ability to control the future and preserve the planet. Chomsky argues for the urgency of international climate and arms agreements, showing how global popular movements are mobilizing to force governments to meet this unprecedented challenge to civilization's survival.

Considered the founder of modern linguistics, Noam Chomsky is one of the most cited scholars in modern history and among the few most influential public intellectuals in the world. He has written more than 100 books, his most recent being Requiem for the American Dream: The 10 Principles of Concentration of Wealth & Power. Before coming to the University of Arizona as Laureate Professor of Linguistics in 2017, Chomsky taught at Massachusetts Institute of Technology for 50 years.Charles Derber is Professor of Sociology at Boston College, and co-author of Glorious Causes: The Irrationality of Capitalism, War and Politics (Routledge, 2019). An internationally renowned scholar and public intellectual, he has written over 20 books, translated into eight languages, and more than 100 articles.Suren Moodliar is co-author of A People's Guide to Greater Boston (University of California Press, forthcoming). He is both a coordinator of encuentro5, a movement-building space in downtown Boston, and managing editor of Socialism and Democracy, a journal of strategy.Paul Shannon is program staff for the Peace and Economic Security program of the American Friends Service Committee (AFSC).