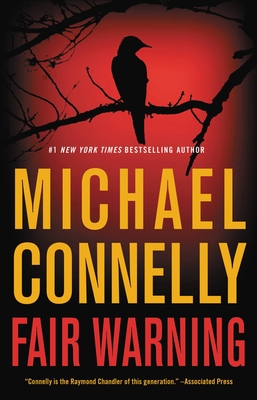 By Michael Connelly
$31.00
Order Processes in 1-5 Days Depending on Store Stock

This is book number 3 in the Jack McEvoy series.

The hero of The Poet and The Scarecrow is back in the new thriller from #1 New York Times bestselling author Michael Connelly. Jack McEvoy, the journalist who never backs down, tracks a serial killer who has been operating completely under the radar--until now.
Veteran reporter Jack McEvoy has taken down killers before, but when a woman he had a one-night stand with is murdered in a particularly brutal way, McEvoy realizes he might be facing a criminal mind unlike any he's ever encountered.
Jack investigates--against the warnings of the police and his own editor--and makes a shocking discovery that connects the crime to other mysterious deaths across the country. Undetected by law enforcement, a vicious killer has been hunting women, using genetic data to select and stalk his targets.
Uncovering the murkiest corners of the dark web, Jack races to find and protect the last source who can lead him to his quarry. But the killer has already chosen his next target, and he's ready to strike.
Terrifying and unputdownable, Fair Warning shows once again why "Michael Connelly has earned his place in the pantheon of great crime fiction writers" (Chicago Sun-Times).

Michael Connelly is the author of thirty-three previous novels, including the #1 New York Times bestsellers, The Night Fire and Dark Sacred Night. His books, which include the Harry Bosch series, the Lincoln Lawyer series, and the Renée Ballard series, have sold more than seventy-four million copies worldwide. Connelly is a former newspaper reporter who has won numerous awards for his journalism and his novels. He is the executive producer of Bosch, starring Titus Welliver, and the creator and host of the podcast Murder Book. He spends his time in California and Florida.

"[A] fast-paced thriller, written by a master of the genre."
—Christina Ianzito, AARP

"There is no better news than a new book from the great Michael Connelly... Fair Warning brings back reporter Jack McEvoy, a character I always liked every bit as Harry Bosch or Mickey Haller or Renee Ballard... Connelly [is] at the very top of his game."—Mike Lupica, New York Daily News

"A truly terrifying thriller... [Jack McEvoy] has appeared in only two previous novels, but they are two of Connelly's best: The Poet and The Scarecrow. McEvoy makes it three for three with this riveting tale."—Bill Ott, Booklist (starred review)

"Intruiging... Throughout his outstanding thrillers, Michael Connelly has expertly weaved contemporary issues into solid plots... Connelly also has achieved this in his novels about journalist Jack McEvoy, who makes his third most welcome appearance in Fair Warning."—Oline H. Cogdill, South Florida Sun-Sentinel

"Score another one for the dean of America's crime writers... Fair Warning sheds light on the murky billion-dollar world of DNA testing... the subject [is] ripe for a good mystery. And Michael Connelly is just the guy to write it."—Sandra Dallas, Denver Post

"Like all of Connelly's novels, Fair Warning is a satisfying adrenalin rush."—Colette Bancroft, Tampa Bay Times

"Darkly essential reading for every genre fan who's ever considered sending a swab to a mail-order DNA testing service."
—Kirkus (starred review)

"A smart, propulsive thriller... Connelly excels in making investigative reporting as enthralling as any action scene. Fair Warning shines a spotlight on the shocking lack of government oversight in the field of DNA analysis and ancestry identification... Connelly spins a skin-crawling, cutting-edge mystery about the dangerous ways the data can be mined."—Shelf Awareness