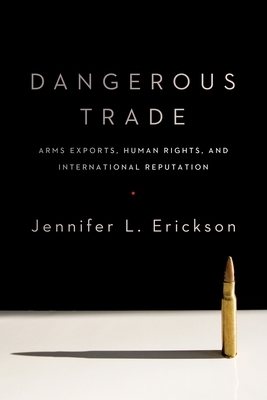 By Jennifer Erickson
Email or call for price.

The United Nations's groundbreaking Arms Trade Treaty (ATT), which went into effect in 2014, sets legally binding standards to regulate global arms exports and reflects the growing concerns toward the significant role that small and major conventional arms play in perpetuating human rights violations, conflict, and societal instability worldwide. Many countries that once staunchly opposed shared export controls and their perceived threat to political and economic autonomy are now beginning to embrace numerous agreements, such as the ATT and the EU Code of Conduct. Jennifer L. Erickson explores the reasons top arms-exporting democracies have put aside past sovereignty, security, and economic worries in favor of humanitarian arms transfer controls, and she follows the early effects of this about-face on export practice. She begins with a brief history of failed arms export control initiatives and then tracks arms transfer trends over time. Pinpointing the normative shifts in the 1990s that put humanitarian arms control on the table, she reveals that these states committed to these policies out of concern for their international reputations. She also highlights how arms trade scandals threaten domestic reputations and thus help improve compliance. Using statistical data and interviews conducted in France, Germany, Belgium, the United Kingdom, and the United States, Erickson challenges existing IR theories of state behavior while providing insight into the role of reputation as a social mechanism and the importance of government transparency and accountability in generating compliance with new norms and rules.

Jennifer L. Erickson is associate professor of political science and international studies at Boston College. She has also been a nuclear security fellow at the Center for International Security and Cooperation at Stanford University and a research affiliate at the Massachusetts Institute of Technology Security Studies Program.