The Mismeasure of Progress: Economic Growth and Its Critics (Hardcover) 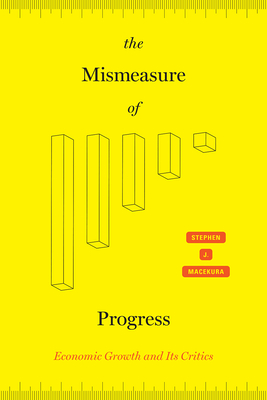 Few ideas in the past century have had wider financial, political, and governmental impact than that of economic growth. The common belief that endless economic growth, as measured by Gross Domestic Product, is not only possible but actually essential for the flourishing of civilization remains a powerful policy goal and aspiration for many. In The Mismeasure of Progress, Stephen J. Macekura exposes a historical road not taken, illuminating the stories of the activists, intellectuals, and other leaders who long argued that GDP growth was not all it was cracked up to be.

Beginning with the rise of the growth paradigm in the 1940s and 1950s and continuing through the present day, The Mismeasure of Progress is the first book on the myriad thinkers who argued against growth and the conventional way progress had been measured and defined. For growth critics, questioning the meaning and measurement of growth was a necessary first step to creating a more just, equal, and sustainable world. These critics argued that focusing on growth alone would not resolve social, political, and environmental problems, and they put forth alternate methods for defining and measuring human progress.

​In today’s global political scene—marked by vast inequalities of power and wealth and made even more fraught by a global climate emergency—the ideas presented by these earlier critics of growth resonate more loudly than ever. Economic growth appealed to many political leaders because it allowed them to avoid addressing political trade-offs and class conflict. It sustained the fiction that humans are somehow separate from nonhuman “nature,” ignoring the intimate and dense connections between the two. In order to create a truly just and equitable society, Macekura argues, we need a clear understanding of our collective needs beyond growth and more holistic definitions of progress that transcend economic metrics like GDP.

"The reader comes away persuaded that GNP, although an imperfect summary indicator of the state of an economy, plays an outsize role in contemporary conceptions of economic policy and performance."
— Foreign Affairs

“This book asks a profoundly important question: What counts as progress? Since the mid-twentieth century, the answer has been the narrow one: economic growth as measured by GDP. Although there have been genuine gains from higher incomes and innovation, this has undermined progress by undervaluing many kinds of work, increasing inequality to a socially intolerable degree, and hastening climate change and environmental degradation. Macekura argues convincingly that we need a better future and better measures.”
— Diane Coyle, University of Cambridge

“The Mismeasure of Progress is a highly readable and informative book about the champions and critics of the idea of economic growth over the last several decades. Macekura writes with the kind of urgency and engagé spirit that makes this book not only good scholarship but an important public intervention.”
— Quinn Slobodian, Wellesley College

"What he brings is a unified story about the critics of GDP and the System of National Accounts told from the 1940s on, and particularly including the perspective of the economists and statisticians working on or in developing economies.”
— Enlightened Economist

"Macekura does an impressive job surveying the critique of ‘growth as progress’ from the earliest days to the present, and then showing how it was largely ignored. His argument is beautifully written and compelling."
— Survival: Global Politics and Strategy