The Caribbean: A History of the Region and Its Peoples (Paperback) 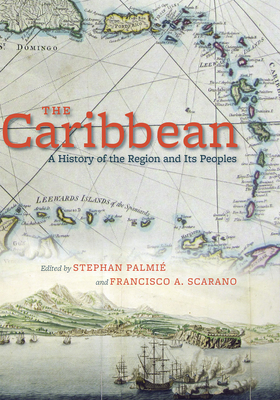 By Stephan Palmié (Editor), Francisco A. Scarano (Editor)
Email or call for price

Combining fertile soils, vital trade routes, and a coveted strategic location, the islands and surrounding continental lowlands of the Caribbean were one of Europe’s earliest and most desirable colonial frontiers. The region was colonized over the course of five centuries by a revolving cast of Spanish, Dutch, French, and English forces, who imported first African slaves and later Asian indentured laborers to help realize the economic promise of sugar, coffee, and tobacco. The Caribbean: A History of the Region and Its Peoples offers an authoritative one-volume survey of this complex and fascinating region.

This groundbreaking work traces the Caribbean from its pre-Columbian state through European contact and colonialism to the rise of U.S. hegemony and the economic turbulence of the twenty-first century. The volume begins with a discussion of the region’s diverse geography and challenging ecology and features an in-depth look at the transatlantic slave trade, including slave culture, resistance, and ultimately emancipation. Later sections treat Caribbean nationalist movements for independence and struggles with dictatorship and socialism, along with intractable problems of poverty, economic stagnation, and migrancy.

Written by a distinguished group of contributors, The Caribbean is an accessible yet thorough introduction to the region’s tumultuous heritage which offers enough nuance to interest scholars across disciplines. In its breadth of coverage and depth of detail, it will be the definitive guide to the region for years to come.

Stephan Palmié is professor of anthropology at the University of Chicago, specializing in Afro-Caribbean cultures. He is the author of Wizards and Scientists: Explorations in Afro-Cuban Modernity and Tradition.

Francisco A. Scarano is professor at history at the University of Wisconsin–Madison, specializing in the Caribbean and Latin America. He is the author of Puerto Rico: Cinco siglos de historia.

“This collection provides an engaging introduction to the history of a region defined by centuries of colonial domination and popular struggle. In these essays readers will recognize the Caribbean as a garden of social catastrophe and a grim incubator of modern global capitalism, as well as of people’s continuous attempts to resist, endure, or adapt to it. Scholars and students will find it to be a very useful handbook for current thinking on a vital topic.”
— Vincent Brown, professor of history and of African and African American studies, Duke University

“A welcome collection of state-of-the-art contributions by prominent scholars of the Caribbean, discussing a broad range of topics from pre-Columbian cultures via plantation slavery and decolonization to the Caribbean diaspora. . . . An excellent and highly readable textbook, surely recommended for teaching Caribbean history.”

“This is a remarkable and admirably ambitious collection. The span is overwhelming, for it reaches from physiography and indigenous settlement to today’s economics and politics. . . . The Caribbean: A History of the Region and its Peoples will enable just about any reader—student, scholar, layperson—to learn more about this anciently Europeanized part of the world than he or she knew before.”
— Sidney W. Mintz, William L. Straus Jr. Professor Emeritus, Department of Anthropology, Johns Hopkins University

"The editors of this volume have successfully assembled a survey of historical and contemporary issues which serves as an excellent introductory text for newcomers to the region, as well as a resource for more experienced researchers searching for a concise reference to any historical period."
— Journal of Caribbean History

“Studies that treat the Caribbean as a unified region, although relatively few in number, have been of extraordinary importance in understanding the basic characteristics of the region’s singularly unusual history and inordinately complex culture. . . . The authors, primarily drawn from the fields of history, anthropology, sociology, political science, archaeology, geography and geology, are uniformly outstanding and are highly respected scholars in their fields.”
— Franklin W. Knight