Bankers and Empire: How Wall Street Colonized the Caribbean (Hardcover) 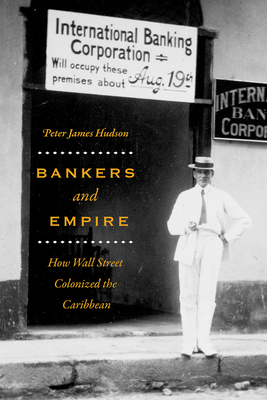 By Peter James Hudson
Email or call for price

From the end of the nineteenth century until the onset of the Great Depression, Wall Street embarked on a stunning, unprecedented, and often bloody period of international expansion in the Caribbean. A host of financial entities sought to control banking, trade, and finance in the region. In the process, they not only trampled local sovereignty, grappled with domestic banking regulation, and backed US imperialism—but they also set the model for bad behavior by banks, visible still today. In Bankers and Empire, Peter James Hudson tells the provocative story of this period, taking a close look at both the institutions and individuals who defined this era of American capitalism in the West Indies. Whether in Wall Street minstrel shows or in dubious practices across the Caribbean, the behavior of the banks was deeply conditioned by bankers’ racial views and prejudices. Drawing deeply on a broad range of sources, Hudson reveals that the banks’ experimental practices and projects in the Caribbean often led to embarrassing failure, and, eventually, literal erasure from the archives.

Peter James Hudson is assistant professor of history and African American studies at the University of California, Los Angeles.

“Hudson has produced an exceptionally well-researched study of the expansion of U.S. banking in the Caribbean and Central America from the 1890s to the 1930s. . . The level of detail that Hudson deploys is truly impressive. . . Hudson’s masterful account will be the essential starting point for studies of capitalism and empire in the Caribbean.”
— Business History Review

“Hudson augments extensive existing knowledge by examining the financial side of U.S. occupation in unparalleled depth. . . . By employing massive research and eloquent prose, he has produced a landmark in the field.”
— Diplomatic History

“Hudson has a strong ability to distill complex financial laws and procedures for non-specialist readers. Considering the complex subject matter, he also keeps the book well-organized by dexterously meshing chronological and thematic elements. His approach allows the reader to stay focused amid a multiplicity of bankers who organized complex webs of financial institutions in a variety of countries. Hudson draws on a wide variety of printed material, private correspondence, and government records to scrutinize the bankers who colonized the Caribbean. Bankers and Empire combines meticulous research with compelling arguments to produce valuable insight into America’s
troubled past in the region.”
— The American Historian

“Hudson’s work is an extremely important contribution to the history of finance, comparative Caribbean studies, and critical race theory. More generally, any scholar working under the vague but ubiquitous rubric of “transnationalism” should benefit from this book, which carefully pushes against the assumption of the nation as a stable unit of analysis. Instead, Hudson shows how we are always ensconced in overlapping and multilingual structures of affiliation that do not necessarily follow the nice lines of imperial or anti-imperial narratives. . . .Bankers and Empire is not contented with a pithy phrase, the blithe balancing of unbridled global profit with domestic regulation. Instead, Hudson’s story ultimately asks us not what but who is allowed to live and condemned to die in the age of global capitalism.”
— Small Axe

“An important contribution to our understanding of dollar diplomacy and its effects. . .[Bankers and Empire] will be welcomed by experts.”
— Hispanic American Historical Review

“Hudson’s terrific book chronicles the rise of international banking from the end of the Spanish American War to the crises that led to the Great Depression. Beginning in the new zones of American power—Cuba, the Dominican Republic, Panama, and Haiti—the story wends through the Caribbean with detours through the Philippines, Argentina, Mexico, and the American West. It captures a world transitioning from nineteenth-century colonial European projects to an era of American global imperialism, vast labor migrations, the opening of China and Japan to western trade, and the growth of industries of connection and disconnection such as railroads.”
— New West Indian Guide

“An impressive achievement. . .Bankers and Empire will be a valuable resource for historians and social scientists with expertise in Latin America and the Caribbean as well as students with interests in finance, capitalism, imperialism, racism, and critical historiography.”
— Journal of Cultural Economy

“In a moment when the financial sector still enjoys general immunity from the social ills its institutions cause, Bankers and Empire arrives to write American banking squarely into the history of American imperialism. Hudson’s brave and timely account makes clear that the United States didn’t just come to dominate the Americas by sheer chance of history. Rather, the United States drove out European powers and pressed its influence through the arm of its military, the might of its largest banks, and the cultural logics of Jim Crow. After this book, there can be no denying that capitalism had a culture, that markets are often made at the barrel of a gun, or that domination of the Caribbean remained central to the making of the contemporary American and modern Atlantic World. Tremendous.”
— N. D. B. Connolly, author of A World More Concrete: Real Estate and the Making of Jim Crow

“Bankers and Empire gives new meaning to the phrase that the Caribbean is ‘the playground of the elite.’ In what is arguably the most original contribution to new capitalist studies, Hudson weaves a poetic account of how well-heeled Wall Street bankers—with a little help from the military—turned the Caribbean into their private laboratory where they toyed with sovereign debt, invented new global financial instruments, pried open new markets, amassed spectacular wealth, and left ruin in their wake, all the while evading US regulatory regimes. Hudson demolishes whitewashed corporate narratives to reveal a grisly dialectic of racial capitalism and resistance, of workers and peasants for whom money was no abstraction, and of Wall Street edifices built from surf, sand, and blood.”
— Robin D. G. Kelley, author of Thelonious Monk: The Life and Times of an American Original

“Bankers and Empire reveals the dirty work of institutional experimentation that enabled banks to evade regulatory restrictions, override popular opposition, and ensconce themselves in the United States’ Caribbean empire, with devastating effects. A deeply researched and important study of racial capitalism.”
— Mary A. Renda

“Hudson’s Bankers and Empire is a landmark book. In the tradition of W.E.B. Du Bois and Cedric Robinson, Hudson has written a book that illuminates the connection between racial capitalism and US imperialism: between the process by which notions of racial differences were both produced out of and ploughed back into the global surplus harvested by American banks, and the fact that those banks investments abroad were, in the final instance, guaranteed by the military power of the United States. The book’s bold argumentation is rooted in painstaking research in otiose archives. And Hudson writes like an angel on fire.”
— Walter Johnson, author of River of Dark Dreams: Slavery and Empire in the Cotton Kingdom

“Hudson assembles a staggering array of sources, including company literature, newspaper articles, archived correspondence, ledger and minute books, and court and state department reports. . .This impressive amount of source material parallels the expansive ground covered by Hudson’s analysis. . .The greatest strength of Bankers and Empires is that it uses a range of analytical tools developed by cultural, political, social, and business historians.”
— Enterprise and Society