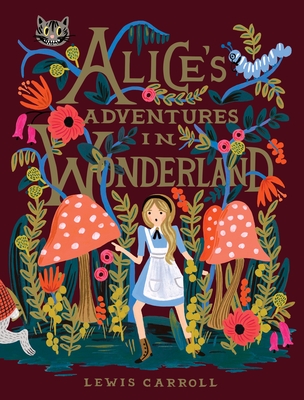 “This illustration-driven edition of the classic tale appeals to booklovers of all ages. The perspective and design provide a satisfying experience for both the reader and the collector.”
— Camille DeBoer, Pooh's Corner, Grand Rapids, MI

Commemorating the 150th anniversary of Alice's Adventures in Wonderland with a deluxe oversized hardcover edition, illustrated in full color by Anna Bond of Rifle Paper Co.

'That curious, hallucinating heroine Alice, friend of Cheshire cats and untimely rabbits, is turning 150 years old. But she doesn’t look a day over a decade in a special new edition of Lewis Carroll’s Alice’s Adventures in Wonderland . . .  And what a perfect match, in tone and whimsy, found in Rifle Paper Co.’s Anna Bond, who has illustrated every page of the book."--Vanity Fair

It's been 150 years since Lewis Carroll introduced Alice's Adventures in Wonderland, the story which has become a favorite of children and adults the world over. Now, in a deluxe hardcover edition from Puffin, Alice's story comes to life for a whole new generation of readers through the colorful, whimsical artwork of Anna Bond, best known as the creative director and artistic inspiration behind the worldwide stationery and gift brand Rifle Paper Co. Lose yourself in Alice's story as she tumbles down the rabbit hole, swims through her own pool of tears, and finds herself in a rather curious place called Wonderland. There, she'll encounter the frantic White Rabbit, have a frustrating conversation with an eccentric caterpillar, and play croquet with the hot-headed Queen of Hearts. Follow Alice on her wild adventure through the eyes of the artist in this definitive gift edition.

Anna Bond (@RiflePaperCo) is the co-owner and creative director of Rifle Paper Co. (riflepaperco.com), the worldwide stationery and gift brand based in Winter Park, Florida. An artist known for her whimsical designs, which often include hand-painted illustrations and lettering, her work has been featured in a number of publications including O, The Oprah Magazine, Vogue, US Weekly, Glamour, Harper's Bazaar, Martha Stewart Living, and Southern Living to name a few. She is the artist behind the popular Puffin in Bloom line of children’s classics and lives with her husband in Winter Park, Florida.

“Publishers are having a creative field day with stunningly beautiful new covers—and lovely insides, too, in the case of Puffin’s whimsical Alice’s Adventures in Wonderland, illustrated by Rifle Paper Co.’s Anna Bond.”—Entertainment Weekly

“Chic…The pretty face of Anna Bond’s Alice looks continually astonished, and even in the scene where her neck grows freakishly serpentine, the heroine remains comely. Elegant and unthreatening, Ms. Bond’s pictures abound with so many flowers and curling vines that Wonderland seems a much nicer place than perhaps we remembered.”—Wall Street Journal

“In this beautiful, oversized, hardcover anniversary edition—with the complete, unabridged text—readers will fall in love all over again with the classic tale of the girl who fell down the rabbit hole. Illustrator Anna Bond, of gift and stationery brand Rifle Paper Co., applies her stylish, whimsical touch and distinctive color palette to Alice and her friends, from the inviting jacket and the case-cover art beneath it to the original endpapers and the superb full-color interior illustrations, large and small.” —Shelf Awareness

“This year marks the 150th anniversary of Lewis Carroll’s beloved classic, Alice’s Adventures in Wonderland. Commemorate the occasion with a deluxe hardcover edition of the tale from Puffin Books, available Oct. 27. The new book is re-illustrated with vibrant, whimsical designs by Anna Bond of Rifle Paper Co., for a one-of-a-kind look at Alice’s imaginative journey.”—American Profile