Vanished Kingdoms: The Rise and Fall of States and Nations (Paperback) 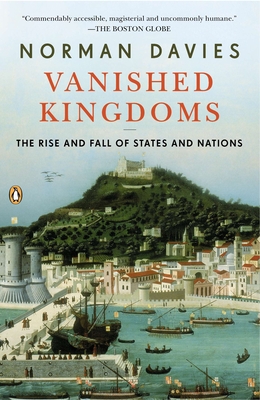 From the bestselling author of Europe: A History comes a uniquely ambitious masterpiece that will thrill fans of lost civilizations

While Germany, Italy, France, and England dominate our conceptions of Europe, these modern states are relatively recent constructs. In this brilliant work of historical reconstruction, Norman Davies brings back to life the long-forgotten empire of Aragon, which once controlled the Western Mediterranean; the Grand Duchy of Lithuania, once the largest country in Europe, and the Kingdom of the Rock, founded by ancient Britons when neither England nor Scotland existed. In the tradition of Jared Diamond's Guns, Germs, and Steel, Davies subverts our established view of the past and urges us to reconsider the impetus for the rise and fall of nations.

Norman Davies is the bestselling author of several acclaimed books, including Europe: A History; Rising '44: The Battle for Warsaw; and No Simple Victory: World War II in Europe, 1939–1945. He lives in Oxford, England, and Cracow, Poland.

“An alternative history of Europe that is . . . densely packed yet commendably accessible, magisterial, and uncommonly humane.” — The Boston Globe


“Hugely ambitious . . . From the mists, Mr. Davies summons the kingdoms; he records their emergence, their flowering and their demise—whether by ‘internall diseases’ or ‘forraign warre’ in Thomas Hobbes’s words. And he examines the traces that the kingdoms have left behind, in works of art or a piece of rock or perhaps just a place name.” — The Wall Street Journal


“Davies resurrects the lands and peoples that were lost in the brutal tide of history. . . . It takes a tremendous feat of empathy to write about countries and peoples that no longer exist. And the amount of information in Vanished Kingdoms that will be new to all but the most expert students of European history is staggering. . . . Fascinating facts and insights flutter on its many pages.” — San Francisco Chronicle

“Davies is well known as an iconoclast who punctures the comforting myths of countries that history has blessed. . . . Vanished Kingdoms gives full rein to his historical imagination and enthusiasms, imparting a powerful sense of places lost in time. All across Europe ghosts will bless him for telling their long-forgotten stories.”

“Davies is certainly one of the best British historical writers of the past half century, and every gauntlet he throws down is bejeweled. His literary gifts and his capacity for what he nicely calls ‘imaginative sympathy’ are stretched to their limits by this challenging project. . . . Yet Davies succeeds, and it is quite a success.”