A Tiger for Malgudi and the Man-Eater of Malgudi (Paperback) 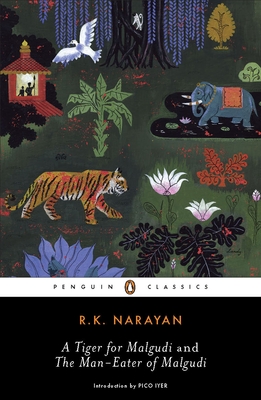 These two novels show R. K. Narayan at his best, offering enchanting tales of human absurdity that are also skillfully woven parables infused with Hindu mysticism. A Tiger for Malgudi is told from the point of view of the tiger Raja, now old and toothless, who looks back on his life in the circus and in films, and on his dramatic bid to escape the brutish human world in a quest for freedom. The Man-Eater of Malgudi is the story of Nataraj, a mild-mannered printer who stands up to Vasu, a pugnacious taxidermist, when Vasu begins to covet the beloved temple elephant for his collection.

R. K. Narayan (1906–2001), born and educated in India, was the author of fourteen novels, numerous short stories and essays, a memoir, and three retold myths. His work, championed by Graham Greene, who became a close friend, was often compared to that of Dickens, Chekhov, Faulkner, and Flannery O'Connor, among others.

"Narayan is a first-rate storyteller."
-The New Yorker