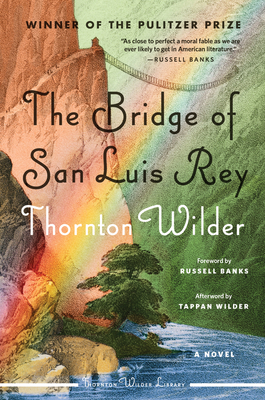 Winner of the Pulitzer Prize

"As close to perfect a moral fable as we are ever likely to get in American literature." —Russell Banks

"There are books that haunt you down the years, books that seem to touch and stir something deep inside you. . . . Wilder's The Bridge of San Luis Rey is of this kind." —The Independent (London)

"On Friday noon, July the twentieth, 1714, the finest bridge in all Peru broke and precipitated five travelers into the gulf below." This immortal sentence opens The Bridge of San Luis Rey, one of the towering achievements in American literature, winner of the Pulitzer Prize, and a novel still read throughout the world.

Brother Juniper, a Franciscan monk, witnesses the tragic event. Deeply moved, he embarks on a quest to prove that it was divine intervention, not chance, that led to the deaths of the five people crossing the bridge that day. Ultimately, his search leads to a timeless investigation into the nature of fate and love, and the meaning of the human condition.

This beautiful edition includes a foreword by acclaimed author Russell Banks and an afterword by Thornton Wilder's nephew, Tappan, with illuminating documentary material about the novel and its rich literary history.

Thornton Wilder (1897-1975) was an accomplished novelist and playwright whose works, exploring the connection between the commonplace and cosmic dimensions of human experience, continue to be read and produced around the world. His Bridge of San Luis Rey, one of seven novels, won the Pulitzer Prize in 1928, as did two of his four full-length dramas, Our Town (1938) and The Skin of Our Teeth (1943). Wilder's The Matchmaker was adapted as the musical Hello, Dolly!. He also enjoyed enormous success with many other forms of the written and spoken word, among them teaching, acting, the opera, and films. (His screenplay for Hitchcock's Shadow of Doubt [1943] remains a classic psycho-thriller to this day.) Wilder's many honors include the Gold Medal for Fiction from the American Academy of Arts and Letters, the Presidential Medal of Freedom, and the National Book Committee's Medal for Literature.

“A remarkably confident evocation of the secret springs of half a dozen men, women and children. . . . A very beautiful book.” — The Nation

“It is a subtle idea admirably worked out and leaves a vivid impression of society in the golden age of the most aristocratic capital of Latin America. The histories of the five people are told perfectly with sympathy and insight.” — New Statesman

“The essence of Mr. Wilder’s book is really the feeling in it; it is a ‘notation of the heart’ with sympathy. Gaily or sadly, but always with understanding, a belief in the miracle of love runs through it all.” — Times Literary Supplement (London)