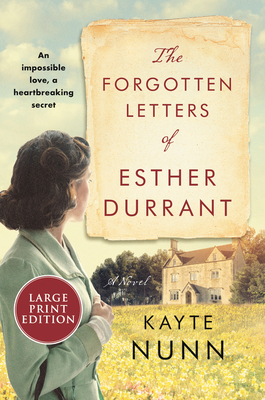 By Kayte Nunn
$21.99
Order Processes in 1-5 Days Depending on Store Stock

A cache of unsent love letters from the 1950s is found in a suitcase on a remote island in this mysterious love story in the tradition of the novels by Kate Morton and Elizabeth Gilbert.

1951. Esther Durrant, a young mother, is committed to an isolated mental asylum by her husband. Run by a pioneering psychiatrist, the hospital is at first Esther’s prison but soon surprisingly becomes her refuge.

2018. Free-spirited marine scientist Rachel Parker embarks on a research posting in the Isles of Scilly, off the Cornish coast. When a violent storm forces her to take shelter on a far-flung island, she discovers a collection of hidden love letters. Captivated by their passion and tenderness, Rachel determines to track down the intended recipient. But she has no idea of the far-reaching consequences her decision will bring.

Meanwhile, in London, Eve is helping her grandmother, a renowned mountaineer, write her memoirs. When she is contacted by Rachel, it sets in motion a chain of events that threatens to reveal secrets kept buried for more than sixty years.

With an arresting dual narrative that immediately captivates the reader, The Forgotten Letters of Esther Durrant is an inspirational story of the sacrifices made for love.

Kayte Nunn is a former magazine and book editor, and the international bestselling author of four novels, among them The Botanist’s Daughter and The Forgotten Letters of Esther Durrant. Originally from Britain, she has also lived in the USA, and now resides in Australia, in Northern New South Wales, with her family.

"Nunn’s U.S. debut is an engaging, dual-period narrative that unravels slowly, tracing Esther’s journey toward healing and wholeness as well as Rachel’s attempts to move beyond her wanderlust and unwillingness to commit to a home, job, or relationship. The romance is unexpected yet authentic, and the ending highlights the enduring power of love and forgiveness. Ideal for readers of Lucinda Riley and Sarah Jio."
— Booklist