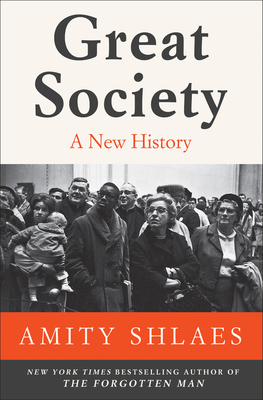 By Amity Shlaes
$32.50
Order Processes in 1-5 Days Depending on Store Stock

The New York Times bestselling author of The Forgotten Man and Coolidge offers a stunning revision of our last great period of idealism, the 1960s, with burning relevance for our contemporary challenges.

"Great Society is accurate history that reads like a novel, covering the high hopes and catastrophic missteps of our well-meaning leaders."  —Alan Greenspan

Today, a battle rages in our country. Many Americans are attracted to socialism and economic redistribution while opponents of those ideas argue for purer capitalism. In the 1960s, Americans sought the same goals many seek now: an end to poverty, higher standards of living for the middle class, a better environment and more access to health care and education. Then, too, we debated socialism and capitalism, public sector reform versus private sector advancement. Time and again, whether under John F. Kennedy, Lyndon Johnson, or Richard Nixon, the country chose the public sector. Yet the targets of our idealism proved elusive. What’s more, Johnson’s and Nixon’s programs shackled millions of families in permanent government dependence. Ironically, Shlaes argues, the costs of entitlement commitments made a half century ago preclude the very reforms that Americans will need in coming decades.

In Great Society, Shlaes offers a powerful companion to her legendary history of the 1930s, The Forgotten Man, and shows that in fact there was scant difference between two presidents we consider opposites: Johnson and Nixon. Just as technocratic military planning by “the Best and the Brightest” made failure in Vietnam inevitable, so planning by a team of the domestic best and brightest guaranteed fiasco at home. At once history and biography, Great Society sketches moving portraits of the characters in this transformative period, from U.S. Presidents to the visionary UAW leader Walter Reuther, the founders of Intel, and Federal Reserve chairmen William McChesney Martin and Arthur Burns. Great Society casts new light on other figures too, from Ronald Reagan, then governor of California, to the socialist Michael Harrington and the protest movement leader Tom Hayden. Drawing on her classic economic expertise and deep historical knowledge, Shlaes upends the traditional narrative of the era, providing a damning indictment of the consequences of thoughtless idealism with striking relevance for today. Great Society captures a dramatic contest with lessons both dark and bright for our own time.

Amity Shlaes is the author of four New York Times bestsellers: The Forgotten Man: A New History of the Great Depression, The Forgotten Man/Graphic, Coolidge, and The Greedy Hand: How Taxes Drive Americans Crazy.

Miss Shlaes chairs the board of the Calvin Coolidge Presidential Foundation and the Manhattan Institute's Hayek Book Prize, and serves as a scholar at the King's College. A former member of the Wall Street Journal's editorial board, Miss Shlaes published a weekly syndicated column for more than a decade, appearing first in the Financial Times, then in Bloomberg.

“This well-researched and smoothly written masterpiece sheds a badly needed lesson-laden light on one of the most important and turbulent times in American history. Shlaes has rendered a book for the ages.”
— Steve Forbes

"Great Society is accurate history that reads like a novel, covering the high hopes and catastrophic missteps of our well-meaning leaders."
— Alan Greenspan

"Shlaes’s account of America in the 1960s recalls her 2007 The Forgotten Man about America in the 1930s, and finds — guess what? — a complicated nation. The author writes with a free style, including information on lesser-known figures of the era, as well as an interesting assessment of Presidents Lyndon B. Johnson and Richard Nixon."
— Washington Post

“A provocative, well-argued take on a turbulent era.”
— Kirkus Reviews

“An illuminating alternative to sentimental reminiscences of liberals’ attempts in the 1960s...to banish poverty in America. Her account is original and persuasive, presenting the leading poverty warriors not with scorn but with sympathy and piercing insight….Ms. Shlaes’s chronicle is not just a story of how good people’s good intentions went wrong. It is also a story of how the assumption that the near future will closely resemble the recent past can lead even the best intentioned and most well-informed people to pursue policies that turn out to be mostly counterproductive and often destructive.”
— Wall Street Journal

"Gripping...the lesson for the future could not be clearer."
— John Taylor, Wall Street Journal