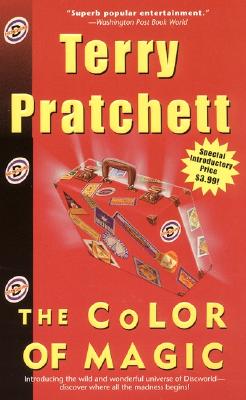 So you want to get into Discworld but you don’t know where to start? Why not start at the beginning? This first novel of Pratchett’s hilarious, engaging, and colorful world offers up an absurd fantasy adventure while introducing all the crazy denizens of the Disc. Soon you’ll be fast friends with Rincewind, Twoflower, Nanny Ogg, and even Death. Pratchett was a machine pumping out 41 of these books; all amazing.

Terry Pratchett's profoundly irreverent novels are consistent number one bestsellers in England, where they have garnered him a revered position in the halls of parody next to Mark Twain, Kurt Vonnegut, Douglas Adams, and Carl Hiaasen.

The Color of Magic is Terry Pratchett's maiden voyage through the now-legendary land of Discworld. This is where it all begins--with the tourist Twoflower and his wizard guide, Rincewind.