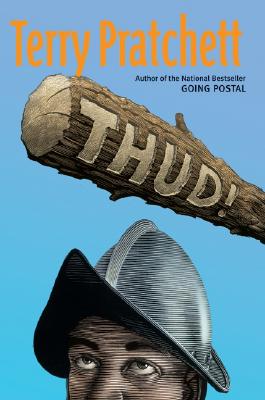 It's a game of Trolls and Dwarfs where the player
must take both sides to win ...

It's the noise a troll club makes when crushing
in a dwarf skull, or when a dwarfish axe cleaves
a trollish cranium ...

It's the unsettling sound of history about
to repeat itself ... THUD

It's the most extraordinary, outrageous,
provocative, insightful, and keenly cutting flight
of fancy yet from Discworld's incomparable
supreme creator ... Terry Pratchett

Commander Sam Vimes of the Ankh-Morpork City Watch admits he may not be the sharpest knife in the cutlery drawer--he might not even be a spoon. But he's dogged and honest and he'll be damned if he lets anyone disturb his city's always-tentative peace--and that includes a rabble-rousing dwarf from the sticks (or deep beneath them) who's been stirring up big trouble on the eve of the anniversary of one of Discworld's most infamous historical events.

Centuries earlier, in a gods-forsaken hellhole called Koom Valley, a horde of trolls met a division of dwarfs in bloody combat. Though nobody's quite sure why they fought or who actually won, hundreds of years on each species still bears the cultural scars, and one views the other with simmering animosity and distrust. Lately, an influential dwarf, Grag Hamcrusher, has been fomenting unrest among Ankh-Morpork's more diminutive citizens with incendiary speeches. And it doesn't help matters when the pint-size provocateur is discovered beaten to death ... with a troll club lying conveniently nearby.

Vimes knows the well-being of his smoldering city depends on his ability to solve the Hamcrusher homicide without delay. (Vimes's secondmost-pressing responsibility, in fact, next to being home every evening at six sharp to read Where's My Cow? to Young Sam.) Whatever it takes to unstick this very sticky situation, Vimes will do it--even tolerate having a vampire in the Watch. But there's more than one corpse waiting for him in the eerie, summoning darkness of the vast, labyrinthine mine network the dwarfs have been excavating in secret beneath Ankh-Morpork's streets. A deadly puzzle is pulling Sam Vimes deep into the muck and mire of superstition, hatred, and fear--and perhaps all the way to Koom Valley itself.

"One of the darker Discworld tales, [THUD!] does not disappoint."
-Sunday Express (London)

"A delight from beginning to end."
-Fantasy & Science Fiction

"As always, Pratchett's latest Discworld yarn is funny, fast-paced, the kind of satire that explores serious issues while making readers love it."
-Booklist