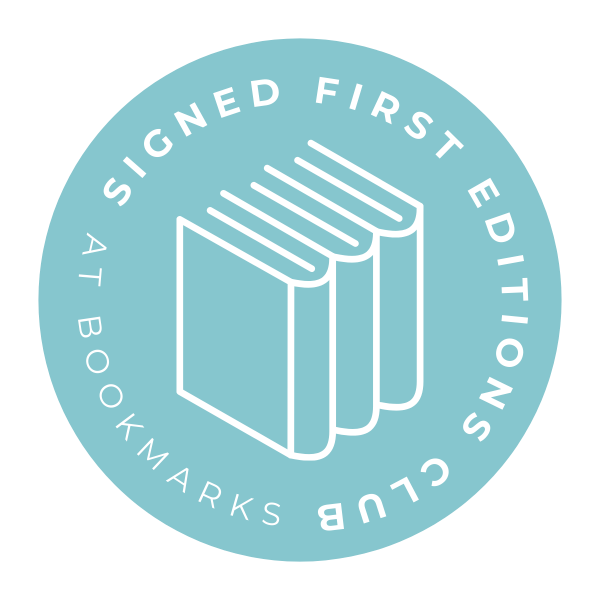 Our Signed First Editions Club picks are new, hardcover fiction and nonfiction that are carefully curated by Bookmarks staff for their literary quality and potential appreciation in value.

When you join SFEC, you are not only building a library with purpose; you are also supporting Bookmarks' nonprofit outreach with a portion of each monthly payment.

WHO IS SFEC FOR?

For investors: Signed first edition books that are sought after by collectors and likely to increase in value
For adventurers: An introduction to books that push boundaries
For book lovers: A new book every month and other SFEC perks
For gift givers: A thoughtful choice for the discerning bibliophile

Each book's dust jacket is wrapped in a protective mylar cover and carefully wrapped in bubble wrap before shipping, which is included in the membership cost. Please note shipping rates are for media mail to continental United States; please contact us for shipping to other countries.

2) Monthly payment: If you prefer to pay monthly ($35/month), start the enrollment process by filling out this form. Monthly charges are processed on the first of each month on an ongoing basis and require a six-month minimum commitment.

If you have questions about SFEC, please email Program Director Beth Seufer Buss at beth@bookmarksnc.org.

Get one month for free when enrolling in a 12-month SFEC membership (total savings of $35 per year).

Our May Signed First Editions Club selection is Trust by Hernan Diaz.

An unparalleled novel about money, power, intimacy, and perception. Even through the roar and effervescence of the 1920s, everyone in New York has heard of Benjamin and Helen Rask. He is a legendary Wall Street tycoon; she is the daughter of eccentric aristocrats. Together, they have risen to the very top of a world of seemingly endless wealth—all as a decade of excess and speculation draws to an end. But at what cost have they acquired their immense fortune? This is the mystery at the center of Bonds, a successful 1937 novel that all of New York seems to have read. Yet there are other versions of this tale of privilege and deceit. Hernan Diaz’s TRUST elegantly puts these competing narratives into conversation with one another—and in tension with the perspective of one woman bent on disentangling fact from fiction. The result is a novel that spans over a century and becomes more exhilarating with each new revelation. At once an immersive story and a brilliant literary puzzle, TRUST engages the reader in a quest for the truth while confronting the deceptions that often live at the heart of personal relationships, the reality-warping force of capital, and the ease with which power can manipulate facts.

Hernan Diaz is the author of two novels translated into more than twenty languages. His first novel, In the Distance, was a finalist for the Pulitzer Prize and the PEN/Faulkner Award. He has also written a book of essays, and his work has appeared in The Paris Review, Granta, Playboy, The Yale Review, McSweeney’s, and elsewhere. He has received a Guggenheim Fellowship, a Whiting Award, the William Saroyan International Prize for Writing, and a fellowship from the New York Public Library’s Cullman Center for Scholars and Writers.