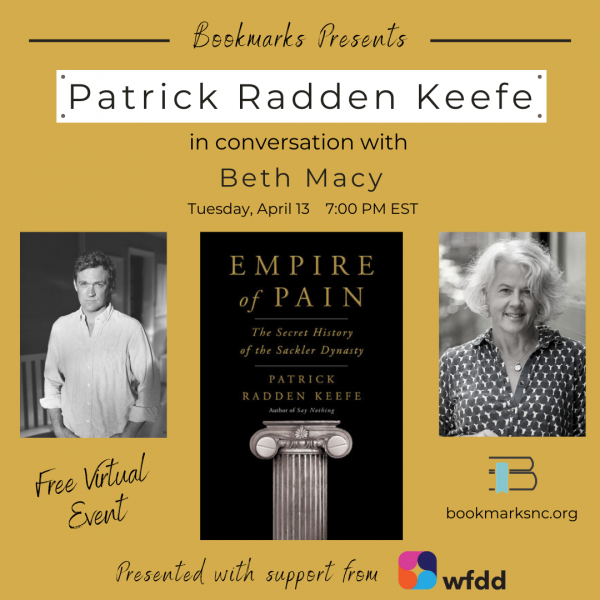 This event is presented with support from WFDD. 88.5 WFDD is proud to sponsor the Virtual Book Discussion of Empire of Pain. 88.5 WFDD is the Piedmont and High Country's public radio station. They broadcast local news, NPR programming and more in North Carolina and Virginia. Their coverage area encompasses 32 counties, and they are your constant companion and your friend. Find out more and listen live at wfdd.org.

About Patrick Radden Keefe:
Patrick Radden Keefe is a staff writer at The New Yorker  and the author, most recently, of the New York Times bestseller Say Nothing: A True Story of Murder and Memory in Northern Ireland, which received the National Book Critics Circle Award for Nonfiction, was selected as one of the ten best books of 2019 by The New York Times Book Review, The Washington Post, the Chicago Tribune and The Wall Street Journal, and was named one of the “10 Best Nonfiction Books of the Decade” by Entertainment Weekly. His previous books are The Snakehead and Chatter. His work has been recognized with a Guggenheim Fellowship, the National Magazine Award for Feature Writing and the Orwell Prize for Political Writing. He is also the creator and host of the eight-part podcast Wind of Change.

About Empire of Pain:
A grand, devastating portrait of three generations of the Sackler family, famed for their philanthropy, whose fortune was built by Valium and whose reputation was destroyed by OxyContin, by the prize-winning, bestselling author of Say Nothing.

The Sackler name adorns the walls of many storied institutions—Harvard, the Metropolitan Museum of Art, Oxford, the Louvre. They are one of the richest families in the world, known for their lavish donations to the arts and the sciences. The source of the family fortune was vague, however, until it emerged that the Sacklers were responsible for making and marketing a blockbuster painkiller that was the catalyst for the opioid crisis.

Empire of Pain begins with the story of three doctor brothers, Raymond, Mortimer and the incalculably energetic Arthur, who weathered the poverty of the Great Depression and appalling anti-Semitism. Working at a barbaric mental institution, Arthur saw a better way and conducted groundbreaking research into drug treatments. He also had a genius for marketing, especially for pharmaceuticals, and bought a small ad firm.

Arthur devised the marketing for Valium, and built the first great Sackler fortune. He purchased a drug manufacturer, Purdue Frederick, which would be run by Raymond and Mortimer. The brothers began collecting art, and wives, and grand residences in exotic locales. Their children and grandchildren grew up in luxury.

Forty years later, Raymond’s son Richard ran the family-owned Purdue. The template Arthur Sackler created to sell Valium—co-opting doctors, influencing the FDA, downplaying the drug’s addictiveness—was employed to launch a far more potent product: OxyContin. The drug went on to generate some thirty-five billion dollars in revenue, and to launch a public health crisis in which hundreds of thousands would die.

This is the saga of three generations of a single family and the mark they would leave on the world, a tale that moves from the bustling streets of early twentieth-century Brooklyn to the seaside palaces of Greenwich, Connecticut, and Cap d’Antibes to the corridors of power in Washington, D.C.  Empire of Pain chronicles the multiple investigations of the Sacklers and their company, and the scorched-earth legal tactics that the family has used to evade accountability. The history of the Sackler dynasty is rife with drama—baroque personal lives; bitter disputes over estates; fistfights in boardrooms; glittering art collections; Machiavellian courtroom maneuvers; and the calculated use of money to burnish reputations and crush the less powerful.

Empire of Pain is a masterpiece of narrative reporting and writing, exhaustively documented and ferociously compelling. It is a portrait of the excesses of America’s second Gilded Age, a study of impunity among the super elite and a relentless investigation of the naked greed and indifference to human suffering that built one of the world’s great fortunes.

About Beth Macy:
Beth Macy is the author of the widely acclaimed and bestselling books Truevine and Factory Man. Based in Roanoke, Virginia for three decades, her reporting has won more than a dozen national awards, including a Nieman Fellowship for Journalism at Harvard.

International Customers: We are happy to ship to most international addresses but cannot process these orders through our automated website. To process a phone payment, please call us at (336) 747-1471 x 1000 Monday-Saturday from 11 a.m. - 7 p.m. or Sunday from 12-6 p.m. To process an online payment, email staff@bookmarksnc.org with your name, order information, and shipping address, and we will send you a PayPal invoice.

Please be aware of our Code of Conduct:
Bookmarks has a zero tolerance policy for harassment of any kind in person or social media, including but not limited to: Stalking; intimidation; offensive verbal comments; physical assault and/or battery; harassing or non-consensual photography or recording; sustained disruption of programs, panels, signings, and other events; bathroom policing; inappropriate physical contact; and unwelcome physical attention, in relation to, but not limited to: race, color, national origin, gender, gender identity, gender presentation, sexual orientation, age, body size, ability, appearance, religion, citizenship, pregnancy. If a person engages in harassing behavior, Bookmarks Staff will take prompt action in any form they deem appropriate, including but not limited to expulsion from the Bookmarks sponsored event or premises. This policy applies to everyone (exhibitors, attendees, authors, speakers, guests, press, staff, board members, and volunteers) at all of Bookmarks events and programming. Anyone can report harassment. If someone's behavior has made you uncomfortable, or if you witness the same happening to someone else, you should immediately contact Bookmarks staff or security. In this virtual landscape, we ask that you remain respectful as you would for an in person event. We will remove and ban you from virtual events if you submit any inappropriate content, offensive or of any nature that does not pertain to the event visually, verbally, or in written content. If removed from the event, you will not receive a refund of any kind.

Empire of Pain: The Secret History of the Sackler Dynasty (Hardcover)

NEW YORK TIMES BEST SELLER • A grand, devastating portrait of three generations of the Sackler family, famed for their philanthropy, whose fortune was built by Valium and whose reputation was destroyed by OxyContin. From the prize-winning and bestselling author of Say Nothing, as featured in the HBO documentary Crime of the Century.