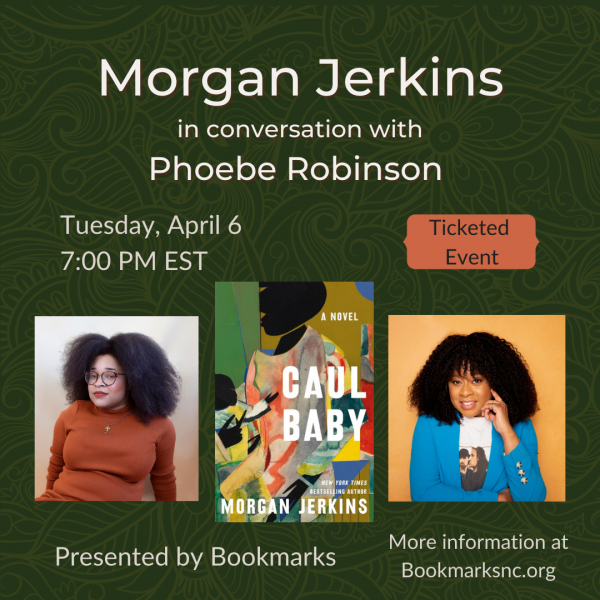 Bookmarks is excited to host Morgan Jerkins on virtual tour for her new book Caul Baby. Join us for this event on Tuesday, April 6th at 7:00 pm Eastern. This event will be available on a very limited release to Bookmarks and a few other bookstores. Morgan will be joined by Phoebe Robinson, author and comedian, in discussion.

About Morgan Jerkins:
She is the New York Times bestselling author of This Will Be My Undoing: Living at the Intersection of Black, Female, and Feminist in (White) America, which was longlisted for PEN/Diamonstein-Spielvogel Award for the Art of the Essay and a Barnes & Noble Discover Pick, and Wandering In Strange Lands: A Daughter of the Great Migration Reclaims Her Roots. Her third book, Caul Baby: A Novel, is forthcoming from Harper Books in April 2021. She holds a BA in Comparative Literature from Princeton University and an MFA from the Bennington Writing Seminars. A recently named Forbes 30 under 30 Leader in Media, Jerkins regularly teaches at Columbia University’s School of the Arts in the Nonfiction department. Born and raised in Southern New Jersey, she’s currently based in Harlem and at work on television and film projects.

About Caul Baby:
New York Times bestselling author Morgan Jerkins makes her fiction debut with this electrifying novel, for fans of Ta-Nehisi Coates and Jacqueline Woodson, that brings to life one powerful and enigmatic family in a tale rife with secrets, betrayal, intrigue, and magic.

Laila desperately wants to become a mother, but each of her previous pregnancies has ended in heartbreak. This time has to be different, so she turns to the Melancons, an old and powerful Harlem family known for their caul, a precious layer of skin that is the secret source of their healing power.

When a deal for Laila to acquire a piece of caul falls through, she is heartbroken, but when the child is stillborn, she is overcome with grief and rage. What she doesn’t know is that a baby will soon be delivered in her family—by her niece, Amara, an ambitious college student—and delivered to the Melancons to raise as one of their own. Hallow is special: she’s born with a caul, and their matriarch, Maman, predicts the girl will restore the family’s prosperity.

Growing up, Hallow feels that something in her life is not right. Did Josephine, the woman she calls mother, really bring her into the world? Why does her cousin Helena get to go to school and roam the streets of New York freely while she’s confined to the family’s decrepit brownstone?

As the Melancons’ thirst to maintain their status grows, Amara, now a successful lawyer running for district attorney, looks for a way to avenge her longstanding grudge against the family. When mother and daughter cross paths, Hallow will be forced to decide where she truly belongs.

Engrossing, unique, and page-turning, Caul Baby illuminates the search for familial connection, the enduring power of tradition, and the dark corners of the human heart.

Phoebe Robinson is a multi-talented stand-up comedian, New York Times best-selling writer, and actress. She is best known as the co-creator and co-star of the hit podcast turned TV show 2 Dope Queens, which aired eight hour-long specials on HBO in February 2018 & 2019. On her second WNYC Studios podcast, the critically-acclaimed talk show Sooo Many White Guys, Phoebe interviews today’s biggest stars and ground breakers such as Tom Hanks, Issa Rae, Abbi Jacobson, and many more. Phoebe is also making her presence known in publishing as she is the author of The New York Times best seller You Can’t Touch My Hair & Other Things I Still Have To Explain, a collection of essays about race, gender and pop culture. Phoebe made her feature film debut as one of the stars of the Netflix comedy Ibiza and followed that up by acting alongside Taraji P. Henson in the Paramount film What Men Want. She was also a staff writer on MTV’s hit talking head show, Girl Code and IFC’s Portlandia, as well as was a consultant on season three of Broad City.

Please note: The Bookmarks team processes each order individually, including event registrations. **Registration for this event will close on Monday, April 5** You will receive an email the day of the event with a login link to this event from HarperCollins Publishers.

International Customers: We are happy to ship to most international addresses but cannot process these orders through our automated website. To process a phone payment, please call us at (336) 747-1471 x 1000 Monday-Saturday from 11 a.m. - 7 p.m. or Sunday from 12-6 p.m. To process an online payment, email staff@bookmarksnc.org with your name, order information, and shipping address, and we will send you a PayPal invoice.

“The true strength of this book has a profound impact: in conveying the life-giving and life-sustaining power of Black women’s bodies, and the blood relationships between them. . . .