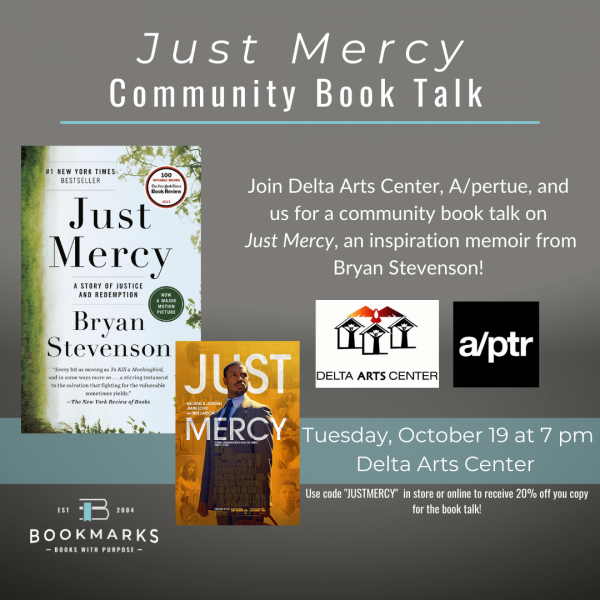 This is a free, in-person event that continues the conversation from the free screening of Just Mercy (2019) the movie on Tuesday, September 28 at a/perture cinema.

Also, use the promo code JUSTMERCY in-store or online for 20% off your copy.

Delta Arts Center is an art gallery, cultural center, and rental facility located in East Winston-Salem; the heart of the local African-American community. Our exhibitions are free and open to the public, and our programming reaches 7,000 visitors annually. Located at 2611 New Walkertown Winston-Salem, NC 27101. Learn more by visiting their website at www.deltaartscenter.org.

To entertain and engage the community through the art of film by showcasing informative, educational, thought-provoking, and inspiring films—the films that enrich our lives, engage our minds, promote diversity, and build community.

For the past decade, a/perture has been serving the community the art of film and providing a communal cinematic experience. We screen over 175 films and special events annually, with more than 4,000 screenings and an average of 41,000 admissions per year. a/perture is the only dedicated year-round art house cinema in the Piedmont Triad.

#1 NEW YORK TIMES BESTSELLER • NOW A MAJOR MOTION PICTURE STARRING MICHAEL B. JORDAN AND JAMIE FOXX • A powerful true story about the potential for mercy to redeem us, and a clarion call to fix our broken system of justice—from one of the most brilliant and influential lawyers of our time.

“[Bryan Stevenson’s] dedication to fighting for justice and equality has inspired me and many others and made a lasting impact on our country.”—John Legend

Bryan Stevenson was a young lawyer when he founded the Equal Justice Initiative, a legal practice dedicated to defending those most desperate and in need: the poor, the wrongly condemned, and women and children trapped in the farthest reaches of our criminal justice system. One of his first cases was that of Walter McMillian, a young man who was sentenced to die for a notorious murder he insisted he didn’t commit. The case drew Bryan into a tangle of conspiracy, political machination, and legal brinksmanship—and transformed his understanding of mercy and justice forever.

Just Mercy is at once an unforgettable account of an idealistic, gifted young lawyer’s coming of age, a moving window into the lives of those he has defended, and an inspiring argument for compassion in the pursuit of true justice.

“Every bit as moving as To Kill a Mockingbird, and in some ways more so . . . a searing indictment of American criminal justice and a stirring testament to the salvation that fighting for the vulnerable sometimes yields.”—David Cole, The New York Review of Books

“You don’t have to read too long to start cheering for this man. . . . The message of this book . . . is that evil can be overcome, a difference can be made. Just Mercy will make you upset and it will make you hopeful.”—Ted Conover, The New York Times Book Review

“Inspiring . . . a work of style, substance and clarity . . . Stevenson is not only a great lawyer, he’s also a gifted writer and storyteller.”—The Washington Post

“As deeply moving, poignant and powerful a book as has been, and maybe ever can be, written about the death penalty.”—The Financial Times

Bryan Stevenson is the executive director of the Equal Justice Initiative in Montgomery, Alabama, and a professor of law at New York University Law School. He has won relief for dozens of condemned prisoners, argued five times before the Supreme Court, and won national acclaim for his work challenging bias against the poor and people of color. He has received numerous awards, including the MacArthur Foundation “Genius” Grant.

Just Mercy: A Story of Justice and Redemption (Paperback)

#1 NEW YORK TIMES BESTSELLER • NOW A MAJOR MOTION PICTURE STARRING MICHAEL B. JORDAN AND JAMIE FOXX • A powerful true story about the potential for mercy to redeem us, and a clarion call to fix our broken system of justice—from one of the most brilliant and influential lawyers of our time.