Film with Purpose: Boss: The Black Experience in Business presented by RiverRun and Bookmarks 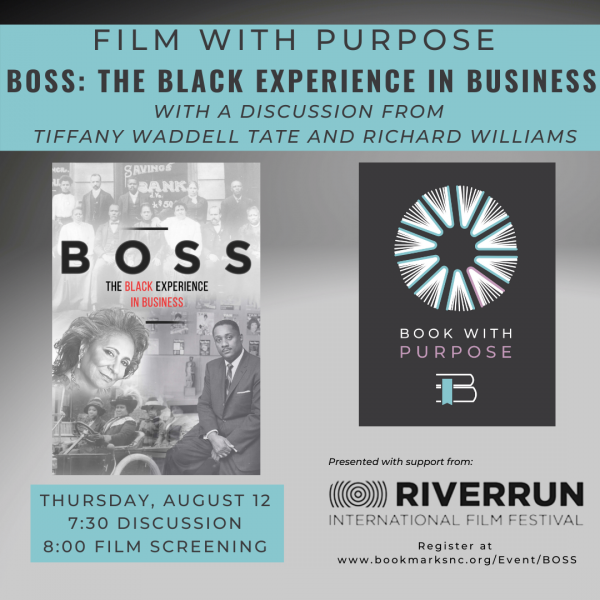 Join RiverRun and Bookmarks on Thursday, August 12 at 7:30 pm for a film discussion and viewing of Boss: The Black Experience in Business!

The film discussion will be with Tiffany Waddell Tate and Richard Williams at 7:30 pm then the film will start at 8 pm.

This is a free, in-person event at Bookmarks so make sure you register here before the event!

About Boss: The Black Experience in Business:

The history of business and entrepreneurship lies at the heart of the American story, but often absent from that narrative are the experiences of African Americans. From the country’s earliest days, African Americans have embodied the qualities of innovation, risk-taking and determination to forge a path toward a better life. The new two-hour documentary traces the lives of African American entrepreneurs over 150 years, from those bound by bondage to moguls at the top of million-dollar empires.

Directed by Peabody- and Emmy Award-winning filmmaker Stanley Nelson (Tell Them We Are Rising: The Story of Historically Black Colleges, The Black Panthers: Vanguard of the Revolution and Freedom Summer), Boss: The Black Experience in Business shines a light on the story of resilience and resistance within the black American experience in the face of racial hostility and violence, economic exclusion, segregation and discrimination.

Tiffany is the CEO and founder of Career Maven Consulting, where she helps individuals and companies reimagine the future of work through coaching, digital education, and learning & development for organizations and teams. As an in-demand coach, consultant, speaker and thought leader, she has been featured on Forbes, Well + Good, The Everymom, The Muse and a variety of podcasts. She is a master in coaching professionals to learn, lead, and grow at work. Tiffany is a Double Deac, having earned her BA and MA from Wake Forest University, and is a Gallup Certified Strengths Coach, Diversity Educator, and MBTI Certified. Tiffany serves on the board of Reach Women’s Network, an organization that seeks to advance economic development and promote gender equality, and the advisory board of the Black Philanthropy Initiative of the Winston Salem Foundation, an initiative that promotes equity in education and economic development for the Black community. In 2020, Tiffany received both a Greater Winston “Under 40” Leadership Award, and a Triad Business Journal "Under 40" Leadership Award, honoring people who excel in their fields, contribute to the community, and demonstrate strong leadership for Winston-Salem and Forsyth County.

Richard L. Williams is Publisher and Chairman of HBCU Matters magazine and Publisher and Executive Editor of Black Business Ink magazine, which he founded in 2020 and 2003, respectively. He is a founding partner of BBM Marketing+PR and founder and convener of the State of Black North Carolina Conference (www.StateofBlackNC.com). Richard has worked at newspapers in North Carolina, New York and Washington, D.C., and as a corporate executive at R.J. Reynolds Tobacco Co. He is a founding member of the Winston-Salem (N.C.) African American Chamber of Commerce; has been honored by the N.Y. Chapter of NABJ and the NNPA, the latter of which was accompanied by a congratulatory letter from President Bill Clinton. He led fundraising efforts to establish the Salem Lodge/Robert A. Miller Endowed Scholarship Fund for students attending HBCUs. He is a former adjunct professor at Winston-Salem State University.

The RiverRun International Film Festival is a non-profit cultural organization dedicated to the role of cinema as a conduit of powerful ideas and diverse viewpoints. Founded in 1998, RiverRun is a competitive event that annually showcases new films from both established and emerging filmmakers around the world. Each spring, RiverRun screens new narrative, documentary, short, student and animated films, offering both audience and jury prizes in competition categories. The 24th RiverRun International Film Festival will take place April 21–April 30, 2022. Learn more by visiting www.riverrunfilm.com.