All the Love: Romance Meet and Greet 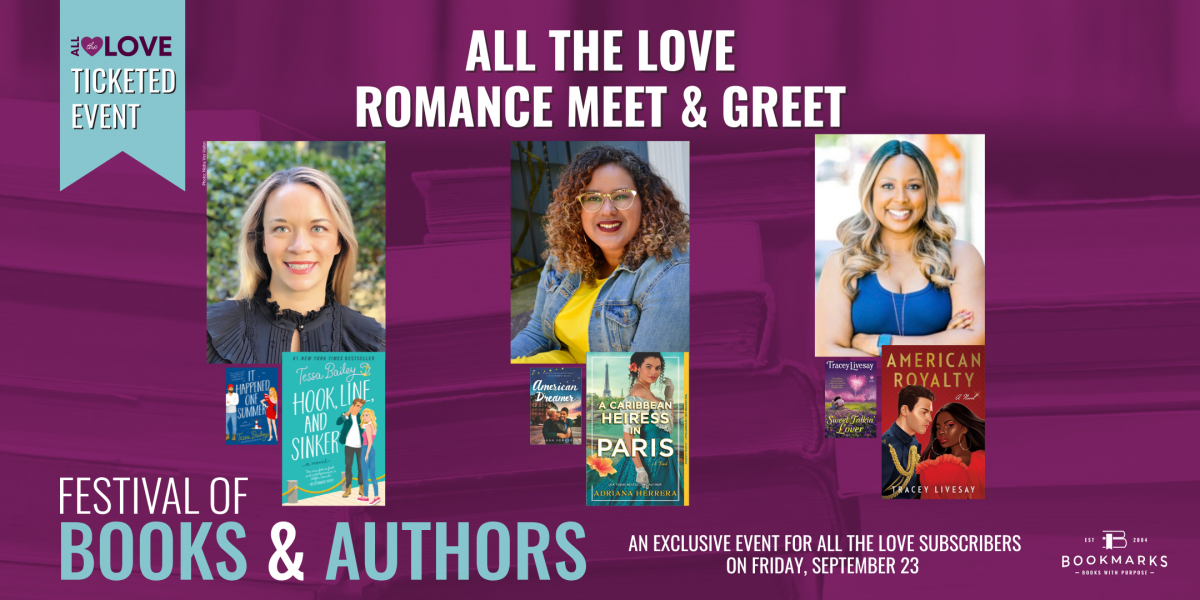 Not a subscriber? Click here to sign up! The deadline to become a subscriber is Monday, September 19.

Tessa, Adriana, and Tracey will also be in attendance at on our main free festival day on Saturday, September 24! Learn more here.

#1 New York Times Bestselling author Tessa Bailey can solve all problems except for her own, so she focuses those efforts on stubborn, fictional blue collar men and loyal, lovable heroines. She lives on Long Island avoiding the sun and social interactions, then wonders why no one has called. Dubbed the “Michelangelo of dirty talk,” by Entertainment Weekly, Tessa writes with spice, spirit, swoon and a guaranteed happily ever after. Catch her on TikTok at @authortessabailey or check out tessabailey.com for a complete list of books.

In the follow-up to It Happened One Summer, Tessa Bailey delivers another deliciously fun rom-com about a former player who accidentally falls for his best friend while trying to help her land a different man…

King crab fisherman Fox Thornton has a reputation as a sexy, carefree flirt. Everyone knows he’s a guaranteed good time—in bed and out—and that’s exactly how he prefers it. Until he meets Hannah Bellinger. She’s immune to his charm and looks, but she seems to enjoy his… personality? And wants to be friends? Bizarre. But he likes her too much to risk a fling, so platonic pals it is.

Now, Hannah's in town for work, crashing in Fox’s spare bedroom. She knows he’s a notorious ladies’ man, but they’re definitely just friends. In fact, she's nursing a hopeless crush on a colleague and Fox is just the person to help with her lackluster love life. Armed with a few tips from Westport’s resident Casanova, Hannah sets out to catch her coworker’s eye… yet the more time she spends with Fox, the more she wants him instead. As the line between friendship and flirtation begins to blur, Hannah can't deny she loves everything about Fox, but she refuses to be another notch on his bedpost.

Living with his best friend should have been easy. Except now she’s walking around in a towel, sleeping right across the hall, and Fox is fantasizing about waking up next to her for the rest of his life and… and… man overboard! He’s fallen for her, hook, line, and sinker. Helping her flirt with another guy is pure torture, but maybe if Fox can tackle his inner demons and show Hannah he’s all in, she'll choose him instead?

About A Caribbean Heiress in Paris

The Exposition Universelle is underway, drawing merchants from every corner of the globe...including Luz Alana Heith-Benzan, heiress to the Ca a Brava rum empire.

Luz Alana set sail from Santo Domingo armed with three hundred casks of rum, her two best friends and one simple rule: under no circumstances is she to fall in love. In the City of Lights, she intends to expand the rum business her family built over three generations, but buyers and shippers alike can't imagine doing business with a woman...never mind a woman of color. This, paired with being denied access to her inheritance unless she marries, leaves the heiress in a very precarious position.

Enter James Evanston Sinclair, Earl of Darnick, who has spent a decade looking for purpose outside of his father's dirty money and dirtier dealings. Ignoring his title, he's built a whisky brand that's his biggest--and only--passion. That is, until he's confronted with a Spanish-speaking force of nature who turns his life upside down.

From their first tempestuous meeting, Luz Alana is conflicted. Why is this titled--and infuriatingly charming--Scottish man so determined to help her?

For Evan, every day with Luz Alana makes him yearn for more than her ardent kisses or the marriage of convenience that might save them both. But Luz Alana sailed for Paris prepared to build her business and her future; what she wasn't prepared for was love finding her.

Tracey Livesay’s latest release, Like Lovers Do, was named one of the 100 Best Fiction Books of 2020 by Kirkus Reviews and one of the Top 10 Romances of 2020 by Entertainment Weekly. She’s also the 2020 Emma Award winner for Best Interracial Romance for Sweet Talkin’ Lover. In addition to being named to USA Today’s list of “100 Black Novelists You Should Read,” she’s been featured in The New York Times, The Washington Post, The Chicago Tribune and on CBS This Morning. A former criminal defense attorney, Tracey lives in Virginia with her husband–who she met on the very first day of law school–and their three children.

In this dangerously sexy rom-com that evokes the real-life romance between Prince Harry and Duchess Meghan Markle, a prince who wants to live out of the spotlight falls for a daring American rapper who turns his life, and the palace, upside down.

Sexy, driven rapper Danielle “Duchess” Nelson is on the verge of signing a deal that’ll make her one of the richest women in hip hop. More importantly, it’ll grant her control over her life, something she’s craved for years. But an incident with a rising pop star has gone viral, unfairly putting her deal in jeopardy. Concerned about her image, she’s instructed to work on generating some positive publicity… or else.

A brilliant professor and reclusive royal, Prince Jameson prefers life out of the spotlight, only leaving his ivory tower to attend weddings or funerals. But with the Queen’s children involved in one scandal after another, and Parliament questioning the viability of the monarchy, the Queen is desperate. In a quest for good press, she puts Jameson in charge of a tribute concert in her late husband’s honor. Out of his depth, and resentful of being called to service, he takes the advice of a student. After all, what’s more appropriate for a royal concert than a performer named “Duchess”?

Too late, Jameson discovers the American rapper is popular, sexy, raunchy and not what the Queen wanted, although he’s having an entirely different reaction. Dani knows this is the good exposure she needs to cement her deal and it doesn't hurt that the royal running things is fine as hell. Thrown together, they give in to the explosive attraction flaring between them. But as the glare of the limelight intensifies and outside forces try to interfere, will the Prince and Duchess be a fairy tale romance for the ages or a disaster of palatial proportions?